Experts recommend measures to reduce unsustainable trade in corals, dolphins,
sharks and seahorses, among other species. 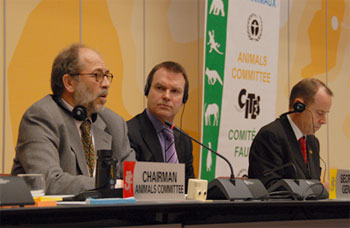 Geneva, 21 March 2012 – The 26th meeting of the Animals Committee of the Convention on International Trade in Endangered Species of Wild Fauna and Flora (CITES) today moves from Geneva, to continue in Dublin, Ireland, where the Committee will convene jointly with the CITES Plants Committee. During the sessions in Geneva, important recommendations were formulated, aimed at ensuring that trade in CITES-listed species of animals is sustainable and based on sound scientific management. The five-days in Geneva focused heavily on aquatic species.

Over 150 experts met in Geneva from 15 to 20 March. They recommended cautious export quotas for a variety of species and countries, including seahorses from Southeast Asia, giant clams from the Pacific and sturgeons from the Caspian Sea. Furthermore, the Committee recommended that exports of live dolphins from Solomon Islands should be limited to a maximum of 10 animals a year. The Committee discussed a list of shark species submitted by member States that may require additional action to enhance their conservation and management (see list attached).

Germany announced that is considering preparing a proposal to include porbeagle (Lamna nasus) in Appendix II, and submitted a draft to the Committee for comments. Senegal submitted a draft proposal to transfer West African manatee (Trichechus senegalensis) from Appendix II to Appendix I for advice. The Committee noted the proposals and the issue of how to determine whether a commercially exploited aquatic species qualifies for listing on CITES Appendices.

Mr Carlos Ibero, Chair of the Animals Committee, stated: “I am glad to see that the Committee was able to focus on key aquatic species such as sharks, dolphins and corals in preparation for the upcoming meeting of the Conference of the Parties to be held in Bangkok in March 2013”.

CITES Secretary-General, John E. Scanlon, said: “It is essential that we provide CITES Parties with sound science and the best available information and advice upon which to base their decisions at the 16th meeting of the Conference of the Parties. We are most grateful to the Committee for the scientific expertise they bring to the work of CITES, which is a critical part of the success of our Convention”.

The CITES Animal Committee provides its technical and scientific advice to help ensure sustainability of international trade in specimens of over 4,500 CITES-listed species of animals, including caviar from sturgeons and reptile skins used in luxury goods.

Report of the working group on Sharks: Implementation of Resolution Conf. 12.6 (Rev. CoP15) on Conservation and management of sharks (Class Chondrichthyes) (agenda item 16) and Draft proposal to include Lamna nasus in Appendix II (agenda item 26.2)

Response to Notification to the Parties No. 2011/049, concerning sharks (submitted by the Secretariat at the request of PEW)