Geneva, 28 February 2012 – The Secretary-General of the Convention on International Trade in Endangered Species of Wild Fauna and Flora (CITES), John E. Scanlon, has expressed grave concern over recent reports of the poaching of close to 450 elephants in Bouba Ndjida National Park in northern Cameroon.

Governments of the region are being offered support to find, and bring to justice, the criminals responsible and to locate and seize the poached ivory. Potential transit and final destination countries have also been urged to remain extremely vigilant and to cooperate.

“This most recent incident of poaching elephants is on a massive scale but it reflects a new trend we are detecting across many range States, where well-armed poachers with sophisticated weapons decimate elephant populations, often with impunity. The CITES programme for Monitoring Illegal Killing of Elephants (MIKE) has revealed increasing levels of poaching in 2011. This spike in elephant poaching is of grave concern not only to Cameroon, a member State to CITES, but to all 38 range States of the African elephant, as well as the Secretariat”, said Mr Scanlon.

It is reported that elephants have been slaughtered by groups from Chad and the Sudan during the last weeks, taking advantage of the dry season. The poached ivory is believed to be exchanged against money, weapons and ammunition to support conflicts in neighbouring countries. A collaborative and coordinated enforcement response is needed.

The Secretariat is contacting the Ministers for Forests and Wildlife from Cameroon, Chad, the Central African Republic, the Democratic Republic of the Congo and the Sudan offering support to help galvanize enforcement efforts and transboundary anti-poaching mechanisms in Africa. 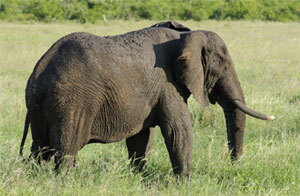 Mr Scanlon has designated Mr Ben Janse Van Rensburg, CITES Chief Enforcement Support, as the CITES Secretariat’s focal point for coordinating support in responding to major elephant poaching incidents. Mr Rensburg is engaging with the countries concerned as well as with partners in the International Consortium on Combating Wildlife Crime (ICCWC), namely Interpol, the World Customs Organization, the United Nations Office on Drugs and Crime (UNODC), and the World Bank, to share intelligence that could be used to help bring the perpetrators to justice, to locate and confiscate the poached ivory, and to help prevent future incidents. Innovative tools such as wildlife forensics, DNA profiling and community-based anti-poaching are also being explored as complementary tools to support the enforcement efforts from the governments.

The MIKE programme will report the latest trends in the illegal killing of elephants across Africa at the 62nd meeting of the CITES Standing Committee in July this year, and will provide a comprehensive analysis of poaching data at the 16th meeting of the Conference of the Parties to CITES, to be held in Bangkok in March 2013.

The spike in poaching that has been detected is affecting African elephants across much of their range. Illegal ivory seized overseas has been shipped from East, West, Central and southern Africa. CITES authorities have not been able to identify the actual origin of this seized ivory, save for a few cases where it was possible to make DNA profiling analysis. Therefore, a national, regional and international approach to manage and conserve elephants is essential

This most recent mass killing demonstrates the need for effectively implementing the Action Plan for the control of trade in elephant ivory that was created under the auspices of CITES. The African Elephant Fund was launched last August at the 61st meeting of the CITES Standing Committee and has collected USD 250,000 in its first few months of operation. Contributions have been received from France, Germany, the Netherlands and the United Kingdom, and more are expected from additional donors such as South Africa.