Bangkok (Thailand), 14 February 2012 - Police and customs heads from 13 Asian countries agreed today to tighten controls and improve cross-border cooperation to curb the illegal smuggling of tigers and other critically endangered species. The accord came at the conclusion of the two-day international "Heads of Police and Customs Seminar on Tiger Crime", which brought together top Police and Customs Officers from countries that still have tigers living in the wild. 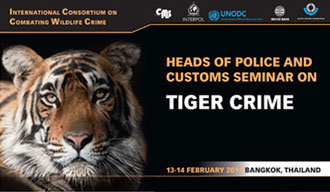 Hosted by the International Consortium on Combating Wildlife Crime (ICCWC), and organised by INTERPOL, in cooperation with the United Nations Office on Drugs and Crime (UNODC) and the World Customs Organization (WCO), and with the technical and financial support from the Convention on International Trade in Endangered Species of Wild Fauna and Flora (CITES) Secretariat and the World Bank, the Tiger Seminar objective was for participants to agree on a robust set of law enforcement-based solutions to protect tigers and other rare and highly threatened species.

The Tiger Seminar brought together 26 delegates from 13 tiger range countries as well as senior representatives from ICCWC members and key partner organisations operating in the field of tiger conservation and wildlife crime. A critical Tiger Seminar activity was to raise awareness among Police and Customs authorities of the impact wildlife trafficking has on wild tigers.

"We must take immediate and urgent action to save these magnificent animals from extinction," said Mr. Kunio Mikuriya, WCO Secretary General. "The global Customs community is firmly committed to working closely with its partners to stop criminal trafficking in endangered species and other environment sensitive goods, by ensuring more vigilant and effective border enforcement among a range of measures."

Environmental crime is a serious international problem with a detrimental impact on the global economy and security. Criminals violate national and international laws through increasingly sophisticated techniques and highly organised networks. Their activities directly affect human health, and threaten the environment and global biodiversity.

"Our efforts to fight tiger crime must not just result in seizures - they must result in prosecutions, convictions and strong penalties to stop the flow of contraband," said Mr. John E. Scanlon, CITES Secretary-General. "If we get the enforcement system right for the tiger, we will help save countless other species together with their ecosystems."

"Wildlife and other environmental criminals too often operate in remote areas with impunity, evading detection, and circumventing full prosecution under the law," said Mr. Keshav Varma, Program Director, World Bank Global Tiger Initiative. "The World Bank and Global Tiger Initiative fully support the resolve of the police and customs officials from tiger range countries to collaborate on intelligence. We applaud efforts to intensify pressure on the organizers of criminal networks and corrupt officials who shield them."

"We need to work collectively through our respective environmental programmes," said INTERPOL's Mr. Jean-Michel Louboutin. "In this context, the INTERPOL Global Complex for Innovation in Singapore will from 2014 provide a key platform to fight environmental crimes in the 21st century."

"If we lose an emblematic species like the Tiger, mankind will be acknowledging that it is prepared to lose any animal on the planet. This must not be allowed to happen." said Mr. Yury Fedotov, Executive Director of UNODC. "By our actions, we must show that we have the capacity, the ability and the commitment to protect other species living on this planet."

Compelled by the need to urgently respond to the burgeoning threat of environmental crime, five inter-governmental organisations formed in 2010 the International Consortium to Combat Wildlife Crime or ICCWC (read I-Quick). These organisations are: the Secretariat of the Convention on International Trade in Endangered Species of Wild Fauna and Flora (CITES), INTERPOL, the United Nations Office on Drugs and Crime (UNODC), the World Bank and the World Customs Organisation (WCO). The consortium seeks to scale up wildlife law enforcement effectiveness, by intelligence-led interdiction and advanced investigative methods.

The "Heads of Police and Customs Seminar on Tiger Crime" is one of the Consortium's first activities. It is a follow-up to the November 2010 St. Petersburg Summit on Tiger Conservation, during which Heads of Governments of 13 tiger range countries committed to increase their cooperation to eradicate poaching, smuggling, and the illegal trade in tigers and tiger parts. Addressing illegal trade is an essential part of the Global Tiger Recovery Program, a comprehensive 12-year strategy endorsed by all 13 countries to double the population of wild tigers by 2022, the next Year of the Tiger.

The Seminar also addressed Decision 15.48 made at the 15th Meeting of the Conference of the Parties to the Convention on International Trade in Endangered Species of Wild Fauna and Flora (CITES) held in Doha in 2010, which states: "The Secretariat shall seek funds to convene, as soon as possible, a seminar involving senior-level Customs and police officers from tiger range States, to brief them on the threatened status of this species, particularly the impact wildlife crime has upon it. The officials shall also be briefed by the Secretariat regarding the Global Tiger Summit, planned under the Global Tiger Initiative, so that the law enforcement community throughout tiger range States is prepared to engage in efforts to safeguard this species and respond to measures adopted at the Summit. The Secretariat shall collaborate with ICPO-INTERPOL, the United Nations Office on Drugs and Crime and the World Customs Organization in preparing the seminar."