Geneva, 7 November 2008 – Over 15 million USD for African elephant conservation and local communities have been raised through the sales of 102 tonnes of stockpiled ivory, according to CITES - the Convention on International Trade in Endangered Species of Wild Fauna and Flora. 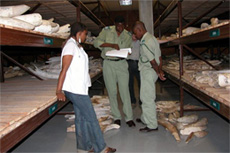 Through four auctions, conducted under the strict supervision of the CITES Secretariat, Botswana, Namibia, South Africa and Zimbabwe sold the 102 tonnes of ivory to Chinese and Japanese accredited traders for a total amount of 15,400,000 USD. The average price paid was USD 157 per kg, which contrasts sharply with the prices allegedly paid for ivory that has entered the market illegally over the past year (USD 750-850).

The ivory sold was all from legal, government-owned stocks; most of it from elephants that died of natural causes during the last 20 years or were culled before 1994 as part of a population control programme. The sales were unanimously authorized by the 172 CITES member States in July 2007.

The Secretary-General of CITES, Mr Willem Wijnstekers, who oversaw the four auctions, stated that, "the ivory sales are the culmination of a transparent decision-making process, which has been a major topic of discussion at CITES meetings for almost two decades.” He stressed that "the sales that have just finished were exceptional", and added: "I hope that the mainstream media will make it clear to everyone that the ivory trade has not reopened."

A number of critics suggest that legal sales of ivory boost illegal trade. The levels of poaching and illegal trade have been closely monitored by CITES since the first experimental sale took place in 1999. The analysis of seizure data shows no correlation between the controlled ivory sales and an increase in poaching. In fact, levels of illegal ivory trade decreased in the two years following the first one-off sale. Poaching levels appear to be more closely related to governance problems and political instability in certain regions of the continent.

Details about the auctions

After banning all international commercial ivory trade in 1989, CITES agreed in 1997 to allow Botswana, Namibia and Zimbabwe to make a first experimental sales from their existing legal stocks of raw ivory. The ivory – which weighed almost 50 tonnes and represented 5,446 tusks - was sold to Japan in 1999 and earned some USD 5 million. The funds were used for elephant conservation activities and the poaching levels in Africa decreased during the two subsequent years to the sale.

The buyers of the ivory were all approved traders from China and Japan, which had been given the green light to buy the ivory in July this year, after the CITES Standing Committee which oversees the operation of the Convention, concluded that they had adequate national legislation and controls to ensure that any ivory imported would not be re-exported and that domestic manufacturing and trade requirements had been met.

Under the agreement reached by CITES in July 2007, the countries that sold the ivory are obliged to use the funds raised exclusively for elephant conservation and community development programmes within or adjacent to the elephant range. Once the ivory has been exported from southern Africa, the monitoring will continue, and the CITES Secretariat will have to verify that the ivory that they first audited in March 2008 is the same ivory that arrives in China and Japan, and that it is correctly entered into the national registers.

The CITES Secretariat is administered by the United Nations Environment Programme.

Note to journalists: For CITES decisions related to ivory trade, linkages between the ivory sales and poaching levels, background documents on the use of the proceeds of the ivory sales and contact details of CITES Authorities in the four countries, see http://www.cites.org. For more information, contact Juan-Carlos Vasquez at +41-22-917-8156 or [email protected]