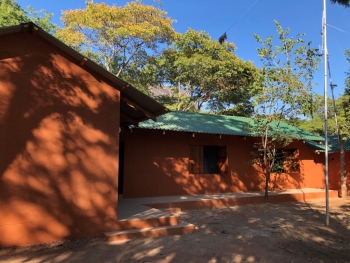 Mozambique’s biggest conservation area - the Niassa National Reserve, recently celebrated the completion of a new annex to its Deparment of Law Enforcement, supported by the Government of Japan through the CITES MIKE Programme (Monitoring the Illegal Killing of Elephants). With an area of 42,000 km², the Niassa National Reserve harbours the largest proportion of the country’s wildlife, and is particularly renowned for its elephants, lions and wild dogs.

At a ceremony hosted by the Administração Nacional das Áreas de Conservação (ANAC) on 10 July 2019, ANAC,  Wildlife Conservation Society (WCS) and? the CITES MIKE Programme who jointly implemented the project, thanked Japan for its generous financial support to the construction of the building. This new wing now serves as a hub to strengthen the coordination and management of wildlife law enforcement operations in the Reserve.

At the event, H.E. Toshio Ikeda, highlighted that ‘The Government of Japan is deeply committed to the cause of protecting elephants from atrocious acts of poaching and attaches great importance to supporting range states in the fight against poaching of elephants. Affirming this stance, Japan decided a new grant to enhance the ability to monitor and prevent poaching of elephants at the Niassa National Reserve in Mozambique.’ This project builds on similar projects that the Government of Japan has supported through the CITES MIKE Programme in Uganda and Zimbabwe. 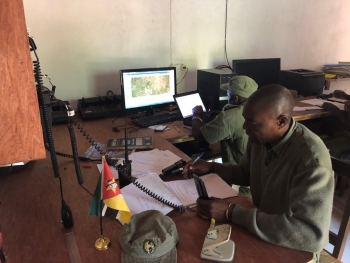 The new law enforcement building is a key component of an ambitious plan to enhance the Reserve’s law enforcement capacity throughout the area. The annex includes a large control room from which operations can be planned, monitored and directed by the area’s commanders. It also has several offices, a staff room, bathrooms and secure storage facilities. The building was designed and built in-house by Niassa Reserve staff in keeping with the aesthetic of the Reserve Headquarters complex.

The new building coincides with a number of other initiatives to tackle what had been a concerningly high rate of elephant poaching and other environmental crimes in Niassa Reserve, such as poaching of lions, illegal hunting and snaring of game for bush meat, illegal mining, illegal logging and illegal fishing. In addition to developing the infrastructure from which operations are directed, management has invested in training, equipping and mobilisation of scouts, and coordination with police forces deployed to the Reserve and scouts working for concession operators. These initiatives together have contributed to a full year without a single illegally killed elephant being detected in the Reserve since May 2018.

The WCS Mozambique Country Director, James Bampton, added that ‘The new law enforcement annex provides a space to bring all law enforcement components together so that operations can be efficiently planned, forces briefed and debriefed, information analysed, and monitored in real-time. This will further enhance the Reserve’s capability to prevent and react to wildlife and environmental crime. We are extremely thankful for the generosity of the Japanese people for this support’.

The CITES MIKE Programme aims to provide objective information on the levels and trends in the illegal killing of elephants to support decision-making on elephant conservation and management. The Niassa National Reserve has been a CITES MIKE site since 2004, and the CITES MIKE Programme has been working with ANAC and WCS since 2015 to help strengthen the wildlife law enforcement capacity in the area, thanks to the generous support provided by the European Union. It is anticipated that this support will continue for another four years—thanks to additional funding provided by the European Union.