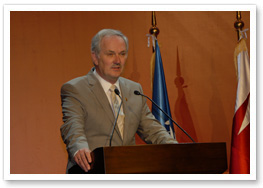 Your Excellencies, distinguished guests, ladies and gentlemen, dear friends,
I am sure to also speak on behalf of the wider CITES community gathered for the coming two weeks in this great capital of the beautiful State of Qatar, when I express our sincere gratitude to the Government and the people of Qatar for hosting this meeting. The organization of an event of this size requires the investment of important financial and human resources. To make such investments is a clear sign of the importance the State of Qatar attaches to the conservation of wild fauna and flora.
This meeting is indeed an important one for the conservation of the world’s wild animals and plants and as such it is a perfect vehicle for raising public awareness in this part of the world of global nature conservation issues. It enables non-governmental organizations and the media from Qatar and from all over the region to follow events more closely than ever. This is greatly enhanced by the generosity of the government of Qatar in providing interpretation into and from Arabic. Although the undoubtedly important side effects of a meeting like this are difficult to measure, the resources invested in conservation by hosting the meeting will undoubtedly come back to the State of Qatar, the peninsula and the whole Middle East, both during the meeting and for a long time thereafter.
I should also like to warmly thank the Government of the State of Qatar and the many other donors of our sponsored delegates project for their generous financial contributions. As a result, participants from a great many developing countries will attend the meeting.
Ladies and gentlemen, in July of this year, the Convention will have been in force for 35 years. Over these years, it has become the Convention with the most direct impact on species conservation and I say without hesitation that, as a result, it is the most successful agreement in the area of biodiversity. That partly explains the enormous interest of Parties, inter-governmental and nongovernmental organizations and the media in the discussions that will take place in the coming weeks. The fact that, yet again, several proposals before us are subject to a wide variety of differing opinions and convictions is of course also responsible for this high level of interest. The first skirmishes have already taken place in the media and I am well aware of the fact that the stakes for many of you are high. I said something similar ten years ago in my opening speech at CoP 11, which clearly shows that CITES has not lost any of its importance and influence over the years, to the contrary. At my first CoP as Secretary-General in 2000, the Convention had 150 Parties. Today, at my last CoP in that function, 175 countries are implementing CITES and a number of countries is about to join. This brings the Convention close to one of my personal goals and to that of the Parties: full global membership.