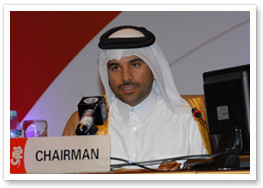 Praise be to Allah, prayers and peace be upon the last Messenger, and his all family and companions,
Mr. Archim Steiner – Executive Director of the United Nations Environment Program (UNEP),
Mr. William Wijnstekers – Secretary General of the Convention on International Trade in Endangered Species of Wild Fauna and Flora (CITES),
Our Distinguished Guests,
Peace, mercy and blessings of Allah be upon you,,
I have the pleasure to welcome you to the meeting of the Fifteenth Conference of parties of the Convention on International Trade in Endangered Species of Wild Fauna and Flora, and we feel pride and glory that you choose the State of Qatar to host this important Conference, which is held for the first time in the Middle East, and I am confident that this Conference will achieve its desired aims through the constructive cooperation and efforts of the Convention member states.
Dear All,
Qatar's care and encouragement to hold such conferences comes through the attention and care of H.H. Sheikh / Hamad Bin Khalifa Al Thani – the Emir of the State of Qatar, may God preserve him, H.H. Sheikh / Tamim Bin Hamad Al-Thani – the Heir Apparent of the State of Qatar, the sponsor of the Conference,  to the environment and provision of unlimited support to wild life.
Our honourable guests,
The Convention on International Trade in Endangered (animal and plant) Species of Wild Fauna and Flora is one of the important international conventions, and one of the most successful international conventions concerned with the protection of wild life, where more than 175 countries participate. The importance of this convention is laid in the achievement of the environmental balance of the wild species, by keeping them in their natural habitat.
You know the importance of the international trade in the animal and plant species, and its economic reflections in which most countries of the world are interested.
In the past, trade was made irregularly and illegitimately, constituting a main threat against the biological variety, subjecting some species to extinction, and causing loss of many different plant and animal species. CITES  Convention has had a considerable influence in keeping these species that are endangered to be extinct, by organizing their trade in, holding conferences, enacting laws, and applying the strategy generated by the Convention to achieve the balance between environment and development.
Honourable guests,
The ranking of the State of Qatar within Category (A) in the International Classification of the Member States in (CITES) Convention puts on our shoulders the responsibility for keeping such a distinction and continuity of support that started long time ago. Qatar has had a great role in keeping some creatures that are endangered to be extinct, including the Arabian Oryx. It was re-settled in natural reserves, and now it is deemed to be the biggest Oryx herds in the Arab World. The natural reserves and gardens of the neighbouring and friendly countries have been enriched from this herd. Now, the Country has more than 1300 heads of it, in addition to other animal and plant creatures to which we give an extreme attention.
Honourable Guests,
There are many important issues included in our agenda within the next two weeks, and I hope that our deliberations will result in the wording of policies, resolutions and recommendations that help insure a real and permanent protection of our natural resources, boost our efforts to limit the illegitimate international trade in the wild creatures, which are deemed to be a decisive step forward.
Finally, I would like to take this opportunity to express my sincere thanks to the secretary general for his fruitful efforts and excellent work of his team. I would also like to thank the present and participating delegations, and thank everyone who participated in preparation and mobilization of this Conference, whether secretariat of the Convention or from the State of Qatar. I hope that Almighty God will crown your meeting with success and prosperity, wishing you all a comfortable stay in Qatar.
Peace, mercy and blessings of Allah be upon you