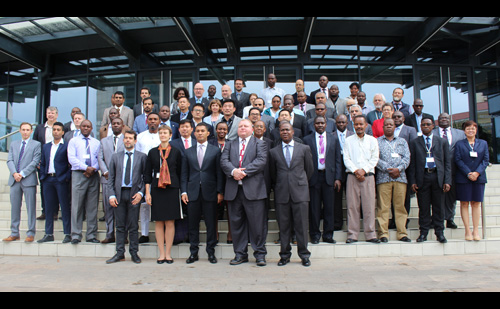 Geneva / Maputo, 7 May 2018- Over 60 representatives from 24 countries across Africa, Asia, Europe and North America, and from intergovernmental and non-governmental organizations, met in Maputo, Mozambique, from 1 to 4 May 2018, to discuss the development and implementation of National Ivory Action Plans (NIAPs).

The Convention on International Trade in Endangered Species of Wild Fauna and Flora (CITES) requires from a number of its Parties that they develop and implement NIAPs to strengthen their controls of trade in ivory and ivory markets, and help combat illegal trade in ivory. Each NIAP outlines the urgent measures that the Party commits to deliver – including legislative, enforcement and public awareness actions as required – along with specified time frames and milestones for their implementation. The Parties concerned are those most affected by illegal trade in ivory, either as source, transit or destination countries.

The CITES Secretariat convened the meeting in Maputo in close cooperation with the Ministry of Land, Environment and Rural Development of Mozambique, and the Secretariat’s partners in the International Consortium on Combating Wildlife Crime (ICCWC), and with generous funding from the United Kingdom. It provided an important opportunity to review the development and implementation of NIAPs, and to exchange experiences and best practices among NIAP countries. The meeting also served to identify opportunities for long-term collaboration among enforcement authorities, cross-border and regional cooperation, joint actions, and resource mobilisation. It gave the opportunity to participants to discuss shared challenges and technical assistance needs. The meeting on the last day comprised a Regional Investigative and Analytical Case Management (RIACM) meeting, facilitated by INTERPOL. The RIACM provided a platform for representatives to share information and intelligence with regard to modus operandi, smuggling routes, and other information relevant to targeting the criminal networks involved in ivory trafficking.

David Morgan, Officer-in-Charge of the CITES Secretariat said: “The relentless collective efforts of the international community to stop the surge in poaching of elephants in Africa, which saw an estimated 100,000 African elephants illegally killed between 2010-2012, has now started to yield some successes. Since reaching a high point in 2011, overall poaching rates in Africa have fallen for five consecutive years. However, the need for urgent actions to address high levels of elephant poaching and illegal trade in their ivory continues to exist. This meeting of NIAP Parties enabled us to bring together key agencies involved in the fight against elephant poaching and illegal trade in ivory.”

The Minister of Land, Environment and Rural Development of Mozambique, HE Mr. Celso Correia, said: “The fight against elephant poaching and illegal trade in ivory will be won through concerted and integrated action, including through strong cooperation between range and destination States.”

The British High Commissioner to Mozambique, HE Ms. Joanna Kuenssberg, said: "Elephants are a part of Mozambique’s and other countries natural heritage. I’m delighted that the UK has been able to support our partners from many countries to develop and implement national ivory action plans. Only through international collaboration will we succeed in beating the poachers and organised criminal networks who exploit vulnerable communities. At this event we have shared ideas for developing human livelihoods in and around habitats rich in wildlife."

Henri Fournel, Coordinator at the INTERPOL Organized and Emerging Crime Sub-Directorate said: “This initiative demonstrates the commitment of the NIAP countries to unite their efforts in tackling the organized crime networks active in environmental crime through an intelligence-led law enforcement approach. INTERPOL acknowledges the continued dedication of the global law enforcement community as well as the efforts deployed by Member Countries with the support of ICCWC in their fight against international ivory trafficking.”

Representatives from Parties implementing NIAPs highlighted that formalizing collaboration between law enforcement agencies at national level by establishing appropriate structures was an essential step in the fight against ivory trafficking. Identified as equally important is legislation that enables addressing wildlife crime as a serious crime, and makes provision for strong deterrent penalties.

The urgent need to further strengthen collaboration across range, transit and destination countries and the increased use of tools such as Mutual Legal Assistance treaties were discussed, as well as how the sharing of information and intelligence can facilitate further strengthening risk profiles and indicators used to detect illegal ivory consignments.

Other matters discussed include the need to closely review poaching and trafficking trends to ensure that new crime trends are swiftly identified and addressed, using new methods developed to enable ivory fingerprinting, the establishment of electronic fingerprint databases, and the collection of samples from large-scale ivory seizures for forensic analyses, in support of investigations and prosecutions.

The meeting also considered how technical and financial support could be more effectively mobilized to support NIAP implementation, and opportunities for such support, as well as private sector and civil society organization engagement in support of combating illegal trade in ivory.

Progress with the development and implementation of NIAPs will be evaluated at the 70th meeting of the CITES Standing Committee (SC70), to be held in Rosa Khutor, Sochi, Russia, from 1 to 5 October 2018.