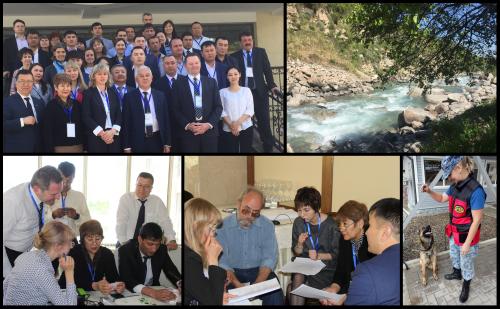 A training workshop on CITES implementation covering legislation, science and enforcement aspects of the Convention was held from 22 to 25 May in Bishkek, Kyrgyzstan. The workshop brought together local partners and representatives from the national CITES Management and Scientific Authorities, as well as customs, from Kazakhstan, Kyrgyzstan, Tajikistan and Uzbekistan.

The workshop was co-hosted by the CITES Secretariat and the State Agency on Environmental Protection and Forestry of the Kyrgyz Republic, and organized in close collaboration with the Office of the United Nations Development Programme (UNDP) in Kyrgyzstan, the Secretariat of the Global Snow Leopard and Ecosystem Protection Programme (GSLEP) and Panthera which all provided invaluable in-kind contributions. The European Union provided generous funding support to the workshop.

During the four days, the 30 participants were engaged in intensive learning and exchange of knowledge and experiences about the legal and scientific aspects of the Convention, as well as the cooperation and communication between the relevant authorities at the national and sub-regional level. Discussions focused on species that are traded as hunting trophies, including Markhor and Marco Polo sheep but also on captive breeding and trade in specimens of tortoises and exotic and native birds. Participants discussed how frequent cross-border movement of live falcons could be allowed under the Convention, specifically in the context of the upcoming World Nomad Games, hosted by Kyrgyzstan in September 2018. Participants also discussed ways and means to better control trade in sturgeon products, including through DNA testing.

“We are very glad that the first CITES workshop for Central Asian countries was held in our country and that we had an opportunity to discuss and learn many issues related to the implementation of CITES”, said Omurbek Musakanov, head of Nature Resources Management Department of the State Agency of the Kyrgyz Republic. “This workshop is significant for the Kyrgyz Republic as for the Party to the CITES Convention especially in terms of the further improvement of the legislation in the field of permit issuance, strengthening the role of the CITES scientific body of the country and cooperation with custom services and border services”.

At the invitation of the State Agency, participants attended a demonstration by the canine unit training centre of the Customs Services of Kyrgyzstan, where four dogs have been trained to detect products of falcon, snow leopard and argali and have already assisted in several important seizures.

One of the objectives of the workshop was to assist countries in their efforts to adopt national legislation that is fully compliant with the requirements of the Convention. At the end of the workshop, all four countries made clear commitments to improve their legislative frameworks.

“We are very encouraged by the level of engagement and commitment we have witnessed throughout the workshop by the participants from all four Parties. At least one Party indicated that this training exercise will greatly assist with the amendment of the national CITES Decree before the next meeting of the CITES Standing Committee in October”, said Sofie H. Flensborg, Lead for the CITES Secretariat on the CITES legislation project

The Standing Committee will meet in Rosa Khutor, Sochi in the Russian Federation and representatives of the four Parties committed to take active part in the meeting. Partners also pledged their support for the participation of these Parties at the next meeting of the Standing Committee, and possibly of the Conference of the Parties in Sri Lanka in 2019 (CoP18). The Office of UNDP in Kyrgyzstan further pledged to support the development of a manual for customs to assist in controls of exports and imports under the Convention.