Marine and timber species top on the agenda. International trade in African elephant, giraffe,
white rhino, saiga antelope, vicuna and many other species also to be addressed
at CITES CoP18 in May 2019 in Colombo, Sri Lanka 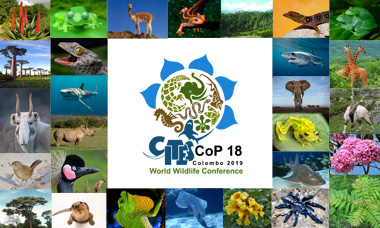 Geneva, 4 January 2019 – 57 proposals to amend the lists of species subject to CITES regulations were submitted by 90 countries for consideration at the next World Wildlife Conference - the 18th meeting of the Conference of the Parties to the Convention on International Trade in Endangered Species of Wild Fauna and Flora (CITES #CoP18), to be held from 23 May to 3 June 2019 in Colombo, Sri Lanka. In addition, a record 140 documents proposing new measures and policies on international trade in wild fauna and flora were submitted for consideration by the Conference.

The proposals to amend the lists of species (i.e. the CITES Appendices) and other documents will be decided upon at the triennial meeting of the 183 Parties to CITES (i.e. 182 countries and the European Union). The proposals are now available on the CITES website in the languages and formats in which they were received. Parties have until mid-March 2019 to provide their comments on these proposals. The CITES Secretariat will also invite comments from relevant intergovernmental bodies.

“The stakes are high under CITES and robust debates are to be expected. Decisions taken in Colombo will have a real and immediate effect on the legislation, regulation, and operating practices across the globe for international trade in the species concerned. Decisions taken at CoP18 will also alter their conservation and international trade management, and have direct impacts on biodiversity, livelihoods of rural communities and national economies”, said Secretary-General, Ivonne Higuero.

The 57 listing proposals cover a wide range of species, from mammals, birds, reptiles, amphibians, fish and insects to a variety of plant species including high value rosewood species. Countries are continuing to use their Convention for ensuring that timber and marine resources are not overexploited by proposing new timber and fishery species for inclusion in the CITES Appendices. For the first time, a proposal has been submitted to include the giraffe, the world's tallest land mammal, under CITES. There is also a proposal to list the mammoth, an extinct species, in CITES Appendix II.

CITES determines international rules governing trade in wildlife. Governments will consider and accept, reject or adjust these proposals for amending the CITES Appendices at CoP18. Unlike most other international agreements, CITES Parties decide by vote where consensus is not possible, with a two thirds majority required.

"I was encouraged by the commitment at the highest levels of decision makers to ensure that the necessary steps will be taken in the next days so that preparations are on track for the next World Wildlife Conference – CITES CoP18. We look forward to facilitating the optimal setting for these discussions for the 183 Parties to CITES, the observers from intergovernmental and non-governmental organizations and the private sector, as well as representatives from rural communities in Colombo in 2019," added Higuero.

Other documents (known as “working documents”) as well as the Secretariat's assessment of the proposals to amend Appendices I and II, will be published on the CITES website at a later stage.

Note to editors: For more information and to arrange interviews, please contact Liu Yuan at +41 22 917 8130 or [email protected]

CITES was signed in Washington D.C. on 3 March 1973 and entered into force on 1 July 1975. Learn more about CITES by visiting www.cites.org or connecting to: