CITES holds first workshop on the legal acquisition of wildlife 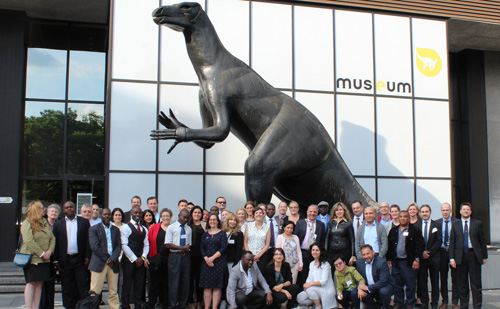 Geneva, 20 June 2018 – Over 80 participants representing 31 Parties, 6 Intergovernmental Organizations and more than 10 non-governmental organizations and academic institutions from Africa, Asia, Europe, Oceania and the Americas met in Brussels from 13 to 15 June to help design guidelines for the making of legal acquisition findings.

These findings, which are one of the two fundamental prerequisites under the CITES Convention, require a legal verification by the Management Authority prior to issuing a CITES permit to the effect that the specimen was sourced and obtained in accordance with relevant laws and regulations throughout the value chain (in other words, legally acquired). Concepts such as the burden of proof, chain of custody, due diligence and risk assessment were discussed abundantly during the deliberations.

Although determining legal acquisition is a vital part of the implementation of the Convention, this was the first workshop dedicated entirely to the subject in the 43-year history of the Convention.

The knowledge and experience of high-level officials and senior experts from the Food and Agriculture Organization of the United Nations ( FAO), the International Tropical Timber Organization (ITTO), the United Nations Economic Commission for Europe (UNECE) /UNCEFACT, the UN Environment World Conservation Monitoring Centre (UNEP-WCMC) and the World Customs Organization (WCO)  in verifying legality and developing trade standards contributed to develop the guidelines and determine the feasibility of their implementation.

The inputs received from NGOs in support of the development of guidelines for the making of legal acquisition findings for all kind of products obtained from CITES-listed wild animals and plants, including timber and fisheries products were welcomed and contributed in a very constructive manner to the discussions.

The outcome of the workshop will be used by the Secretariat to draft a document for the consideration by the Standing Committee, at its 70th meeting in October, which will include draft guidelines for verifying the legal acquisition of specimens of CITES-listed species to be authorized for international trade.

The workshop was held in the facilities of the European Commission and benefited from the simultaneous interpretation in 6 languages, including the three official languages of the Convention (English, French, Spanish), and German, Italian and Portuguese.  Participants expressed its gratitude to the European Union for the financial, technical and logistic support provided for the workshop.

See also: photos from the workshop