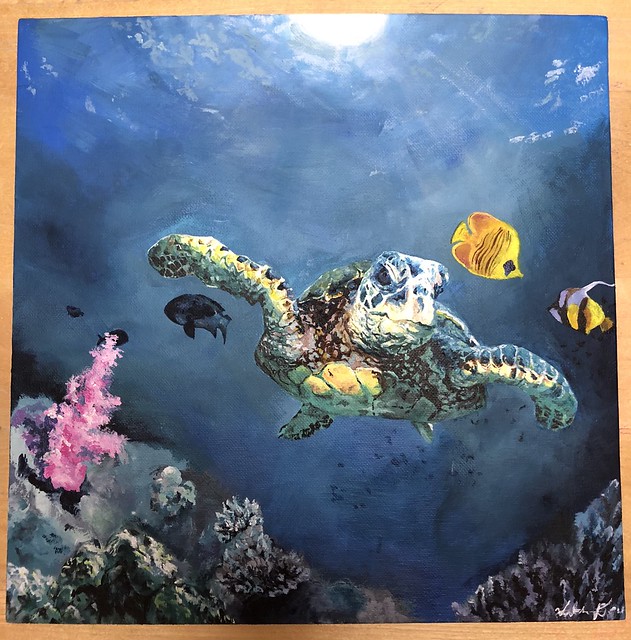 Geneva/New York/Washington, DC, 1 March 2019 –The CITES Secretariat, the International Fund for Animal Welfare (IFAW) and the United Nations Development Programme (UNDP) announced today that 17-year old Valerie Dou of the United States is the winner of the 2019 International Youth Art contest. The art contest was sponsored by IFAW and held in collaboration with the CITES Secretariat and UNDP in celebration of World Wildlife Day 2019, recognized annually on March 3rd to celebrate and raise awareness of the world’s wild animals and plants.

Valerie’s work entitled Ocean in 500 years, depicts a sea turtle swimming through a coral reef ecosystem. Valerie was a guest of honor at the WWD ceremony held today at the UN Headquarters in New York City where she received an award co-presented to her by IFAW and Australian musician Cody Simpson, UNDP’s first-ever Ocean Advocate. Ocean in 500 years was on display during the event.

This year’s art contest focused on marine species with the theme of Life below water: for people and planet, in alignment with the theme of World Wildlife Day 2019 and UN Sustainable Development Goal 14. Aiming to build a sense of connection between youth and the marine world, the contest engaged school-aged children, giving them a chance to highlight the critical importance of marine wildlife to our everyday lives.

According to grand prize winner Valerie Dou, “I chose to paint this scene because I immediately thought about the marine wildlife that must be suffering from the pollution and climate change that is occurring. We may not see the immediate pervasiveness of the issue but I believe it is in this critical window that we can help make the biggest impact. The sea turtle I painted is just one of the many marine wildlife that is caught in the crossfire of human interference. The scene I painted is the ideal I believe we should be striving for, and what we should keep in mind the next time we do something that might harm the ocean, or the environment in general. I hope my painting, in addition to the other entries that were submitted, help to inspire the public and make them more involved in this global phenomenon.”

“The breadth and beauty of the artwork received from all ages has been stunning,” said Kelly Johnston, Program Officer of IFAW. “From the very beginning, we have been excited by the global collaboration and response to this contest. As children have an affinity for both animals as well as art, we welcome the opportunity to increase awareness about the threats faced by wildlife across the globe in a means that offers creativity and expression.”

CITES Secretary-General, Ivonne Higuero said “We are delighted to have Valerie here with us today as the winner of this year’s World Wildlife Day art contest. We are very much inspired by her talent and her interest in wildlife conservation from such a young age. The art contest this year was aimed to motivate and galvanize the youth to act to help reduce the threats to marine wildlife. We thank all the youth who sent in their wonderful artworks. While there can only be one winner, you are all champions of wildlife.”

“On this year’s World Wildlife Day, we want to raise awareness about the critical importance of protecting the diversity of marine species in order to ensure a sustainable future for current and future generations,” said musician and UNDP Ocean Advocate Cody Simpson. “We have come together here in New York today to help inspire young people to play an active role in shaping marine conservation solutions. The future is ours and it’s up to us to make it more sustainable.”

World Wildlife Day was proclaimed by the United Nations General Assembly (UNGA) in 2013 at its 68th session, marking the day of signature of the CITES. Since that time it has become the most important global annual event specifically dedicated to wildlife.

The winning artwork as well as all entries are viewable on the IFAW website.

Founded in 1969, the International Fund for Animal Welfare (IFAW) is a global non-profit organization that protects animals and the places they call home. With offices in 15 countries and projects in over 40, we rescue, rehabilitate and release animals into secure landscapes around the world. In collaboration with both governments and local communities, our experienced campaigners, legal and political experts, and internationally acclaimed scientists pioneer lasting solutions to some of the most pressing animal welfare and wildlife conservation issues of our time.