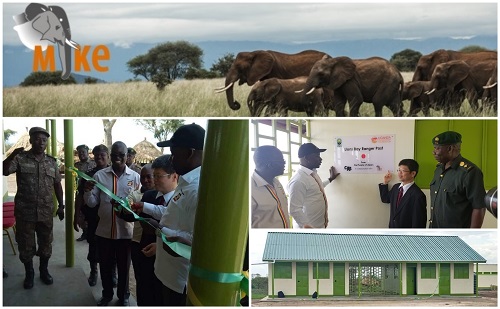 The new outposts provide a base for field rangers conducting operations in two important wildlife and tourism sectors and will significantly strengthen UWA’s capacity to address current and emerging threats impacting this important site of the CITES Monitoring the Illegal Killing of Elephants (MIKE) Programme. The new outposts are part of UWA’s larger Recovery of Queen Elizabeth National Park programme. The project was led on-the-ground on behalf of CITES by the Uganda Conservation Foundation, in close collaboration with UWA.

In March 2017, with the support of the European Union, UWA developed a law enforcement plan for the Queen Elizabeth National Park. The construction and operationalisation of the Lions Bay and Katore Ranger Posts makes a significant contribution to the implementation of priority strategies under this plan, and the recovery of Queen Elizabeth National Park to its former glory.

The Honourable Minister Godfrey Kiwanda highlighted that “The construction and operationalisation of Lions Bay and Katore Ranger Posts has sent a clear signal that UWA is now in management control of the sector. Having a well-built, dry and clean facility, with clean water, solar power lighting and an ablution block, makes rangers feel respected and motivated.”

Queen Elizabeth National Park provides protection for 95 species of mammal, including buffaloes, hippopotami, crocodiles, elephants, leopards, lions and chimpanzees, and over 620 species of birds. The park forms part of an extensive transboundary ecosystem that covers forest reserves and the adjacent Virunga National Park World Heritage Site, in the Democratic Republic of Congo.

“The illegal wildlife trade is an urgent global issue. Japan is deeply committed to the cause of protecting elephants and their natural habitat. Japan places great importance on supporting elephant range states in the fight against elephant poaching”, said Deputy Head of Mission, Embassy of Japan in Uganda, Mr Mizumoto Horii, he continued to add that “Japan continues to make great efforts in implementing the trade control of ivory under CITES and working together with our partners to tackle the problem of elephant poaching and the illegal elephant trade.”

“The recovery of wildlife and tourism in Queen Elizabeth National Park depends on the motivation of our frontline staff and tangible support such as this. This support also provides a solid foundation for growing tourism in Uganda which is already recognised as the countries strongest contributor to the regional and national regional economy” said Uganda Wildlife Authority, Executive Director, Sam Mwandha.

“The funding provided by the Government of Japan, WildAid and the European Union for the development of essential infrastructure needed to support management operations is invaluable. The investment and attention given to the area has had a significant impact on the overall morale of the staff based in the Lions Bay and Katore Sectors and enhanced their capacity to effectively protect the area”, added Thea Carroll, CITES MIKE Programme Coordinator.

Mr. Charles Tumwesigye, Deputy Director of Conservation and Michael Keigwin MBE, Trustee of the Uganda Conservation Foundation and Project Lead of the Recovery of Queen Elizabeth National Park programme, and wildlife rangers, lodge owners and tourism operators in the area were present at the handover ceremony.