Other news items
News and highlights
Press releases
For use of the media only;
not an official document.

Geneva/New York, 17 February 2020 –The 27th edition of UN Endangered Species Stamps series was launched today. For this series the United Nations Postal Administration (UNPA) and CITES Secretariat engaged with the Convention on the Conservation of Migratory Species of Wild Animals (CMS) to feature 12 stamps showcasing CITES-listed migratory species, that are listed in the Appendices of both the Conventions.

CITES Secretary-General, Ivonne Higuero, said: “We are most grateful to the UN Postal Administration for our long-standing cooperation to raise awareness of CITES-listed species through these stamps. We are happy to hear that they are among the most popular series issued by the UNPA. Not unlike the letters on which these stamps might go, migratory species travel around the world to find their destinations and seasonal habitats. This year we are honoured to invite our sister convention CMS to feature CITES-listed migratory species that are also covered by CMS.”

Thanawat Amnajanan, Chief of the United Nations Postal Administration said: “The United Nations Postal Administration is very honoured to be working with CITES and CMS this year to issue stamps featuring endangered migratory species, and to support CMS COP13 in Gandhinagar, India. This is the first time that UNPA has worked with both CMS and CITES – the two UN-backed treaties dedicated to the conservation and regulation of trade of the remaining wildlife on our planet.”

Created by Portuguese designer Sandra Macieira, the 2020 batch showcases a wide range of species found around the world, depicting migratory birds, fish and mammal species including migratory marine species. These include the Great Hammerhead Shark, the Andean Flamingo, the Dalmatian Pelican, Egyptian Vulture,  the Saker Falcon, the Siberian Crane, the Addax, the Argali Sheep, the Kiang, the Lion, the Harbour Porpoise and Narwhal. 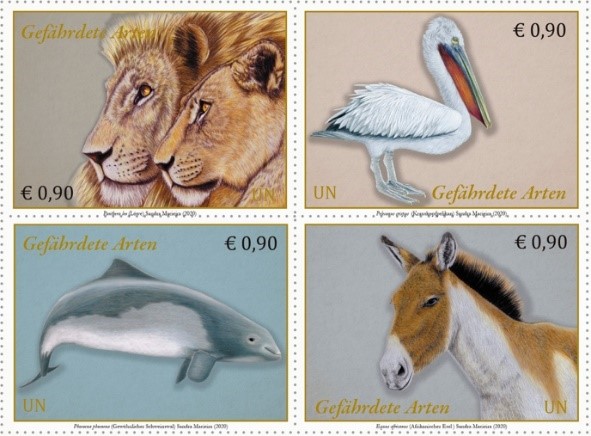 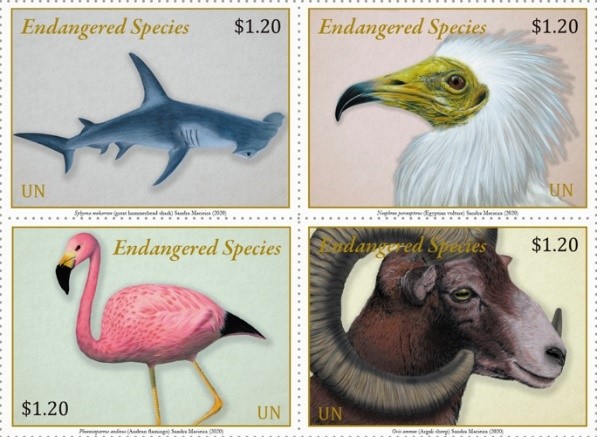 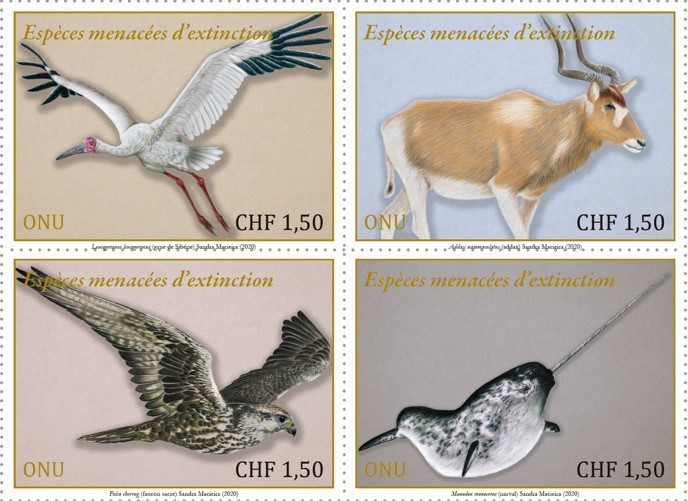 The issuance of this year’s series will also give a nod to the13th meeting of Conference of the Parties to CMS, which is due to take place on February 17-22 in Gandhinagar, India, where the stamps are due to be unveiled by the CITES Secretary-General Ivonne Higuero and the CMS Executive Secretary Amy Fraenkel.

“Both CITES and CMS work to ensure that these travelers can continue to roam the earth and still find a home to settle in. CITES strives to keep the trade of such species legal, sustainable and traceable. As we mark the ‘biodiversity super year’ throughout 2020, we will also advocate for the conservation of these species and their habitats for people, planet and prosperityin support of the UN SDGs. We will continue to work closely with UNPA to explore creative ways in which the endangered species stamps reveal the various wonders of species biodiversity on our planet”, added Higuero.

The Convention on International Trade in Endangered Species of Wild Fauna and Flora (CITES) was signed on 3 March 1973 and entered into force on 1 July 1975. With 183 Parties (182 countries + the European Union), it remains one of the world's most powerful tools for wildlife conservation through the regulation of international trade in over 36,000 species of wild animals and plants. CITES-listed species are used by people around the world in their daily lives for food, health care, furniture, housing, tourist souvenirs, cosmetics or fashion. CITES seeks to ensure that international trade in such species is sustainable, legal and traceable and contributes to both the livelihoods of the communities that live closest to them and to national economies for a healthy planet and the prosperity of the people in support of UN Sustainable Development Goals.