Rosewood, elephants, eels and tigers among many issues to be addressed by CITES annual meeting

Rosewood, elephants, eels and tigers among many issues to
be addressed by CITES annual meeting 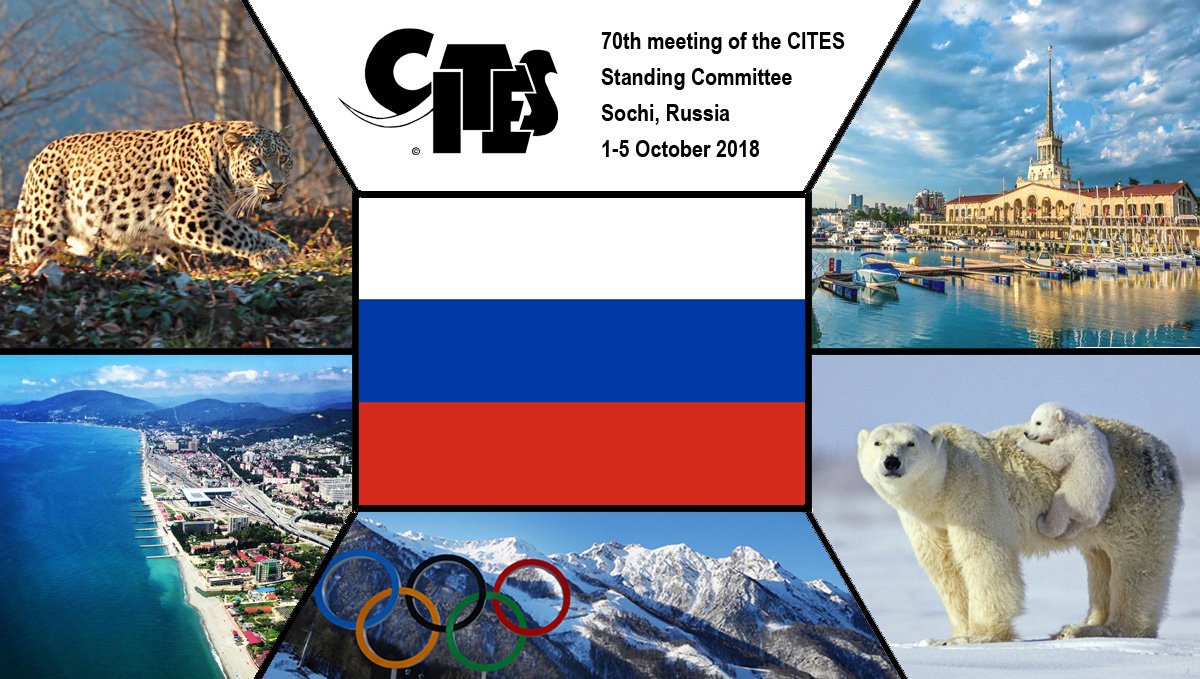 Sochi, 1 October 2018 – More than 700 delegates meet this week for the first time in Russia to tackle crucial wildlife conservation and management issues affecting the survival of a myriad of wild plants and animals, at the 70th meeting of the CITES Standing Committee (SC70) from 1 to 5 October 2018.

“The Standing Committee will assess progress made in the implementation of crucial decisions taken by CITES Parties at the last meeting of the Conference of the Parties, in Johannesburg, South Africa, exactly two years ago, to enhance regulation of legal trade and to combat illegal trade, as well as progress made with the implementation of recommendations agreed by CITES Standing Committee when it last met in November 2017”, said David Morgan, Officer-in-Charge of the CITES Secretariat.

“CITES-listed species are used for many purposes, such as food, cosmetics, furniture, musical instruments, leather products, and others, and the decisions made this week will have a real impact on the ground, ensuring that this use is legal, sustainable and traceable”, he added.

"The Standing Committee has before it a full agenda with many important issues to resolve for presentation to the next meeting of the Conference of Parties. As Chair, I have full confidence that the Committee will meet this challenge, driven by our common goal of ensuring wildlife trade does not pose a threat to wild flora and fauna", said Carolina Caceres, Chair of the CITES Standing Committee.

Members and observers of the Committee are meeting at a time when the overall poaching trends of African elephant have dropped for the sixth consecutive year, since its peak in 2011. The Committee will review progress made by range, transit and destination countries with the implementation of National Ivory Action Plans (NIAPs).

Unsustainable and illegal trade in tropical timber is one of the dominant topics on the agenda for meeting. The situation in Nigeria, Madagascar, the Lao People's Democratic Republic and the Democratic Republic of the Congo will be assessed. The meeting will also discuss the possible exemption of wooden musical instruments from CITES regulations.

A new wildlife capacity-building strategy to provide better aligned and more efficient assistance to Parties rich in wildlife but facing institutional challenges is also on the table.

The Committee will once again demonstrate the strength of the Convention in addressing non-compliance matters. Trade suspensions for a number of countries are under consideration due to various reasons, including the lack of progress in enacting adequate legislation, violation of key provisions of the Convention and lack of scientific assessments required to authorize trade in listed species.

A more detailed summary of some of the key issues to be addressed by the Standing Committee can be found in the annex.

A record over 700 participants from over 80 countries around the world and over 100 observer organizations have registered to attend the meeting.

The following provides a glimpse of the more than 70 items that that will be discussed during the five-day meeting:

At the 17th meeting of the CITES Conference of the Parties in Johannesburg in 2016, more than 350 species of rosewood were included in CITES listings and subject to CITES regulatory measures. High levels of illegal trade in both Africa and Asia are threatening the conservation of these species. The Standing Committee will also discuss the exact types of timber products that are covered by the trade rules of the Convention.

There are reasons for concern that the Nigerian population of the African rosewood (Pterocarpus erinaceus) may be adversely affected by unsustainable or untraceable trade, and that the provisions of the Convention are not being effectively implemented in this regard.

Exports of rosewood from Lao PDR are of concern, because they are suspected to be at unsustainable levels.

Thousands of tonnes of precious rosewood have been seized from illegal loggers in Madagascar. Control and disposal of the vast stockpiles of highly valuable rosewood cut from Madagascar’s rainforests continue to pose a challenge. The Committee will consider a proposal prepared by Madagascar, on the export of some of this rosewood, as well as consider how best to help Madagascar with the management of stockpiles of seized rosewood.

The Standing Committee will also review how international trade in musical instruments, such as guitars or clarinets made from CITES listed timber should be regulated.

The analysis prepared by the CITES Monitoring the Illegal Killing of Elephants (MIKE) programme shows that the poaching trend of African elephant has now dropped for 6 consecutive years, since its peak in 2011.

This demonstrates that continued progress is being made, yet, illegal killing continues at unsustainably high levels that exceed the natural rate of population increase, and a lot remains to be done, especially in Central and West Africa.

The Committee will review progress with the implementation of National Ivory Action Plans (NIAPs). These NIAPs are developed in compliance with recommendations made by the CITES Standing Committee. Each plan outlines the measures that a CITES Party commits to deliver in response to the urgent need to address high levels of elephant poaching and illegal ivory trade.

There are currently 22 Parties participating in the NIAP process, and the Committee will at SC70 decide whether a number of Parties that successfully completed the implementation of their NIAPs, will exit the process, or if there is a need for any Party to revise and update its NIAP, or if any other measures need to be taken.

Illegal trade in European eel is occurring at significant levels. The Standing Committee will consider measures to address this illegal trade including improving traceability of the trade, addressing enforcement challenges and enhanced international cooperation.

Tiger and other Asian big cats

Illegal trade in Asian big cats continues to be of concern. The Standing Committee will consider a comprehensive review of matters affecting Asian big cats which addressed matters such as conservation status, illegal trade, legislative and regulatory measures, national law enforcement, reduction of demand for illegal specimens and education and awareness. The Committee will identify and agree measures to strengthen the fight against this illegal trade.

Further, the CITES Secretariat will report to the Committee on activities it conducted regarding tiger and other Asian big cats in captivity. These activities resulted in the identification of 66 facilities in seven countries (China, Czech Republic, Lao PDR, Thailand, South Africa, United States of America and Viet Nam), that may be of concern.

CITES Parties are obliged to have adequate national legislation to implement and enforce the Convention. Parties failing to enact sufficiently strong legislation can be subject to recommendations to suspend trade in some or all CITES-listed species.

For the very first time, no Parties have failed to submit annual reports on legal trade for three consecutive years (or more) during the period 2015–2017.

A new CITES annual report on illegal trade was introduced at CoP17. The Standing Committee will consider a detailed proposal, prepared by the United Nations Office on Drugs and Crime (UNODC), for the development of a database to store and manage illegal trade data collected through the CITES annual illegal trade reports.

A great diversity of other species, such as African lions, cheetahs, leopards, rhinos, saiga antelope, helmeted hornbill, sharks and rays, tortoises and freshwater turtles, snakes, sturgeons, queen conch are also on the agenda.

The Secretariat will also update the Committee about the growing number of activities delivered under the auspices of the International Consortium on Combating Wildlife Crime (ICCWC), a Consortium between the CITES Secretariat, INTERPOL, UNODC, the World Bank and the World Customs Organization, to strengthen and support criminal justice systems, by mobilizing the technical support, tools and services needed to fight wildlife crime.

CITES was signed in Washington D.C. on 3 March 1973 and entered into force on 1 July 1975.Learn more about CITES by visiting www.cites.orgor connecting to: