Press releases
News and highlights
For use of the media only;
not an official document. 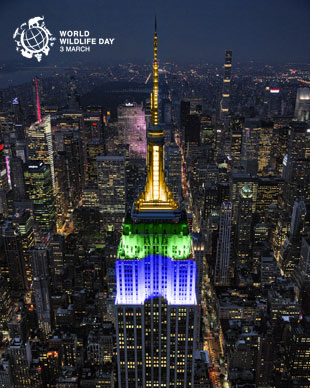 Geneva/New York, 28 February 2020 – The Secretariat of the Convention on International Trade in Endangered Species of Wild Fauna and Flora (CITES), the United Nations Development Programme (UNDP) and Behati Prinsloo, Model and Global Ambassador for Save the Rhino Trust Namibia, announced today that they will team up to light New York City’s iconic Empire State Building in celebration of World Wildlife Day 2020.

The Empire State Building lighting is one of the global events leading to this year’s UN World Wildlife Day (3 March) celebrated under the theme Sustaining all life on Earth. The year 2020, known as the “biodiversity super year”, marks a critical turning point in global action to conserve nature and the planet’s biological diversity.

This year’s World Wildlife Day celebrations will focus on wildlife as a component of biodiversity in its many beautiful and varied forms, raise awareness of the multitude of benefits of wildlife to people, the threats it is facing, and the urgent need for private and public sector commitments.

Behati Prinsloo will flip the switch to turn the Empire State Building’s lights blue (representing SDG 14: Life below Water) and green (representing SDG 15: Life on Land). The building’s mast will be lit gold, representing the plains of Africa, and it will feature an image of a running rhino, as a symbol of the many majestic species that face critical threats.  The lights will continue to be visible to the general public on March 2nd from sunset till 2:00 am 3rd March.

“Wildlife is under immense threat, even in my homeland, Namibia, where rhinos are being senselessly poached. We human beings are doing this to them, yet we have the power to prevent this ancient, noble species from going extinct. Immediate action is needed to conserve wildlife so that our children can grow up with a sense of wonder and appreciation of our rich and diverse planet,” noted Behati Prinsloo.

CITES Secretary-General Ivonne Higuero said: “Wild fauna and flora are part of our everyday lives and valuable for humankind in so many different ways, whether you live next to Gorongosa National Park or in Manhattan. Raising awareness of their value and the threats they face, and pushing for transformative actions in order to conserve them for future generations are the imperative tasks facing governments, civil society, industry and all citizens of the world. Powerful symbolic gestures such as the lighting of an iconic building like the Empire State can galvanize the public and draw their attention to these critical issues. We thank the managers of the Empire State Building for offering such a powerful symbol to celebrate UN World Wildlife Day 2020, and we are most grateful for the important advocacy work of Ms. Prinsloo and the support of our partners at UNDP. “

As noted by Midori Paxton, Head of Biodiversity for the United Nations Development Programme: “Biodiversity underpins all life on Earth. By investing in wildlife conservation and biodiversity, we can realize benefits across all facets of our livesfrom human health and livelihoods, to climate adaptation, as well as peace and security. We hope that the Empire State Building’s lights will inspire all New Yorkers, and the world, to celebrate wildlife and to help conserve all species for a more sustainable, prosperous future.”

With over a decade of experience, Behati Prinsloo is one of the most recognizable names in modeling. At the age of 16, the Namibian born beauty was discovered while on vacation in Cape Town and since then her incredible spirit and personality have shaped her into a fashion icon. Passionate about the play in many of Africa, Behati has used her platform to raise funds for a variety of charities and endeavors on the continent. Most recently, she joined forces with Save The Rhino Trust Namibia to raise awareness for rhino conservation. As part of her alliance with the organization, she launched a global campaign and ventured to her home country of Namibia last year, entrenching herself in its movement to protect the critically endangered black rhino species and preserve the population.

About the Empire State Building