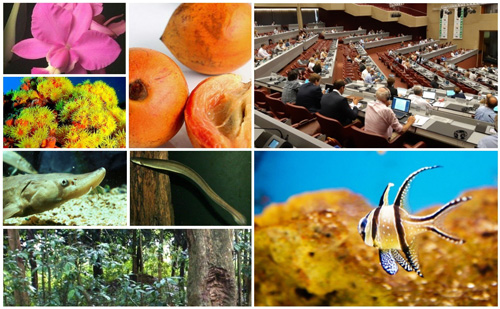 Geneva, 27 July 2018– From 16 to 26 July, Parties, intergovernmental organizations, non-governmental organizations and industry representatives gathered in Geneva at the 30th meeting of the Animals Committee and the 24th meeting of the Plants Committee of the Convention on International Trade in Endangered Species of Wild Fauna and Flora (CITES) – the world’s wildlife trade regulator.

The CITES Animal and Plants Committees meet once a year to provide scientific advice aimed at ensuring the sustainability of global trade in wildlife and wildlife products obtained from over 36,000 species regulated under the Convention. Members and alternate members on the Committees represent each region in their personal capacity; all other participants are observers.

“During the past two weeks, the two scientific committees of CITES reviewed a wide range of issues. The Animals Committee provided technical and scientific guidance on the trade management of a variety of marine species, lions, leopard hunting trophies, great apes, and many more. The Plants Committee focused much of its work on tree species and high-value timbers, but also on agarwood, orchids and African cherry. Jointly, the two committees examined how best to support the making of non-detriment findings by CITES Parties, capacity building issues, and challenges in regulating trade in “wildlife” produced through new biotechnology”, said Tom De Meulenaer, Chief of Scientific Services at the CITES Secretariat.

“At each of their meetings, the Committees review available trade information, and make species- and country-specific recommendations to make sure that exports remain at sustainable levels. This regular review process is key to ensuring that trade in CITES-listed wildlife is not detrimental to wild populations. On this occasion, the Committees advised on some 30 cases, ranging from parrots in Guyana and Suriname to precious timbers in several Central African countries”, added De Meulenaer.

The Committees provided advice on the capacity building work to be undertaken to strengthen Scientific Authorities in CITES Parties, with a focus on the making of scientifically robust non-detriment findings (NDFs) and the identification of CITES-listed species.

Trade in CITES-listed live animals has recently drawn great attention from the general public. The Animals Committee has begun the work on the development of non-binding guidance to assist Parties in determining whether the proposed recipient of a living specimen of an Appendix I species is suitably equipped to house and care for it.

The Animals Committee also discussed the conservation and management of a range of marine and freshwater aquatic species, including sharks and eels.

As scientific advisory bodies of the Convention, the Committees agreed on taxonomic and nomenclature matters and proposals to next World Wildlife Conference – the 18th meeting of the Conference of the Parties to CITES (CoP18) – as well as actions to improve reporting and ensure better traceability, while stressing the need for regional cooperation.

The Plants Committee was updated on the work to implement the CITES Trees Species Programme, which started in June 2017 with an aim to assist Parties in implementing the Convention for tree species through 18 large projects in Africa, Asia and Latin America. The programme is financed mostly by the European Union and is currently designed to run until 2021.

With agenda items on orchids, agarwood, the cosmetics industry as well as two side events on medicinal plants, the Plants Committee sent a strong message to the CITES community regarding non-timber forest products. The Committee encouraged further consideration of this topic when the CITES community prepares for CoP18.

This year’s Animals and Plants Committees had record levels of participation, which not only demonstrates a growing commitment to the Convention but also creates opportunities to strengthen constructive partnerships for future collaboration.