Presentation by
John E. Scanlon
Secretary-General, CITES Secretariat
Tuesday, 24 June 2014, Nairobi, Kenya
On the occasion of the 1st Session of the United Nations Environment Assembly (UNEA)
Honourable Chief Justices, Justices, Attorney’s General
Distinguished guests
Friends and colleagues
It is a great honour to be back in Nairobi to participate in the first UN Environment Assembly, which represents a major milestone in the evolution of international environmental governance, and it is particularly pleasing to be invited to join today’s Global Symposium on Environmental Rule of Law.
——-
Over the past few years we have heard a lot about illegal wildlife trade or illicit wildlife trafficking [1]- but what makes such trade illegal?
For domestic or international trade in wildlife to be described as illegal or illicit, it must contravene either domestic or international law or both. If not, it is legal. 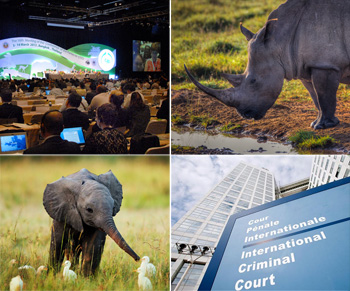