CITES calls for a focus on the front lines. Ecosystems under threat from illegal wildlife trade

Nairobi, 23 June 2014 – CITES welcomes the world’s environment ministers adding their voice to the concerted global efforts underway to combat illegal wildlife trade at the first UN Environment Assembly to be held in Nairobi this week. Over the past three years illegal wildlife trade has been rising to the top of the international agenda. From the UN Security Council to the World Heritage Committee, there is recognition at the highest political levels of the economic, social, environmental and security impacts of this highly destructive criminal activity.

The focus now has to be on the front line.  This means even stronger law enforcement and demand-reduction efforts across multiple countries, to reverse the current dangerous trends. CITES decisions and compliance processes underpin the global effort.

“Ultimately this fight will be won or lost on the front lines, whether in the field, the courtroom, or the market place – not in a conference room.  We have had a lot of important high-level events over the past three years and we must now better focus our collective efforts on local, national and regional actions,”  said John E. Scanlon, Secretary-General of CITES.

Illegal logging, poaching, and wildlife crimes have an impact on over 50% of the Natural World Heritage Sites. The effects of illegal wildlife trade on natural assets were highlighted earlier this month at the 38th session of the UNESCO World Herigate Committee, held in Doha. 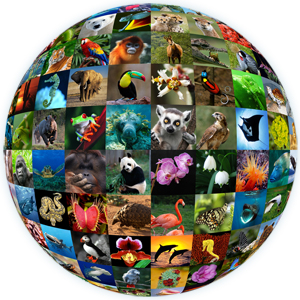 “We cannot allow poaching for the illegal trade in wildlife and the global crime syndicates behind it to destroy entire species - the world is losing the building blocks of our ecosystems that we all rely upon. Africa’s elephants are also known as the ‘ecological engineers’ – they disperse the seeds of the food they eat and are an essential part of healthy and diverse ecosystems. Healthy ecosystems also provide essential services for people – from the provision of fresh water to wildlife-based tourism,” added Scanlon.

Both UNESCO and CITES have expressed concern over World Heritage sites across Africa that are suffering from a surge in poaching, in particular of elephants, which is diminishing their natural heritage value and appeal as wildlife tourism destinations, which can have severe economic consequences. Half of the 14 African World Heritage sites monitored under the CITES Monitoring the Illegal Killing of Elephants (MIKE) programme are now on the “in danger” list, namely Comoé (Cote d`Ivoire), Niokolo-Koba (Sénégal); Garamba, Kahuzi-Biega, Salonga and Okapi (all in the DRC) and Virunga (DRC and Uganda).  The CITES Secretariat is working with the UNESCO World Heritage Centre to better protect these iconic sites.

“The degradation of World Heritage sites through poaching for illegal trade is destroying these beautiful wildlife-based tourism assets impoverishing local people and national economies as well as the world’s natural heritage,” added Scanlon.

In Tanzania for example, 28% of the land-mass is set aside as wildlife areas, forests, wetlands and protected land.Tourism is estimated to account for 17.2% of the GDP, with many tourists going on safari, and hoping to see the ‘big five’.

The government estimates that the elephant population in the Selous and Mikumi game sanctuaries has declined from 38,975 in 2009 to an estimated 13,084 today andCITES estimates that in the past year alone, over 20,000 elephants were illegally killed in Africa.

The Committee added Selous Reserve in Tanzania to the “in danger” list under the World Heritage Convention because  the dramatic decline of 81% of the elephant population since 2005 and the devastating impacts of poaching driven by growing illicit trade, particularly in Asia.

“We are fighting highly organized crime groups that target wildlife for profit. These groups are driven by greed and the scale of their activities can in some places threaten entire ecosystems.  For this reason it remains vital for countries to recognize wildlife crime as a serious crime, to deploy the same tools and specialized techniques that we use to fight other organized crimes, such as human and drug trafficking, against it, and to continue to further enhance and scale up their law enforcement responses to illegal wildlife trade,” said Ben Janse Van Rensburg, CITES Chief of Enforcement Support (and former head of the Environmental Crime Desk of the INTERPOL National Central Bureau in Pretoria, South Africa).

The Outcomes of Rio+20 in 2012 recognised the economic, social and environmental impacts of illicit wildlife trafficking.  Multiple events and initiatives have addressed the economic, social and security impacts of illegal wildlife crime in recognition of the serious nature of these crimes, which today involve transnational organized criminal gangs and in some cases rebel militia.

The UNEA meeting adds to these events and initiatives that have led to unprecedented levels of political attention being given to the illegal wildlife trade and international cooperation to combat it.

The Committee will also consider the roll out of a wide-range of enforcement-related decisions taken by CITES in March 2013 on other species being pressured by illegal trade, including rhinos, Asian big cats, rosewood, pangolins, freshwater turtles and tortoises, great apes, and snakes, as well as a study of the legal and illegal trade in wild cheetahs.

Illicit wildlife trafficking increasingly involves transnational organized crime and in some cases rebel militiaand rouge elements of the military, which has changed the dynamics of combating this highly destructive criminal activity, in particular as it relates to some mega-fauna.

Leaving aside timber and marine products, it is estimated that the annual value of wildlife crime is up to USD 20 billion and it has often been regarded as a high-profit low-risk crime - although this is changingas States recognize the negative economic, social,environmental and security impacts of these crimes.

The UN Conference on Sustainable Development (Rio+20) has explicitly recognized the importance of CITES and the “economic, social and environmental impacts of illicit trafficking in wildlife, where firm and strengthened action needs to be taken on both the supply and demand sides”and has emphasized “the importance of effective international cooperation among relevant multilateral environmental agreements and international organizations.”

CITES Parties responded to this call in March 2013 at the 16th meeting of the Conference of the Parties where a powerful set of decisions to combat illegal wildlife trade were taken by consensus.

Wildlife crime has become a serious threat to the security, political stability, economy, natural resources and cultural heritage of many countries. The extent of the response required to address this threat effectively is beyond the remit of environmental or wildlife law enforcement agencies, or even of one country or region alone.

The UNODC has responded through the development of a 'Global Programme for Combating Wildlife and Forest Crime'.

The Monitoring the Illegal Killing of Elephants (MIKE) programme was established at the 10th meeting of the Conference of the Parties to CITES (Harare, 1997).

The International Consortium on Combating Wildlife Crime (ICCWC) was established in 2010 between CITES Secretariat, INTERPOL, UNODC, World Custom's Organisation and the World Bank to provide coordinated enforcement support to national and regional authorities.[1]

With 180 Member States, CITES remains one of the world's most powerful tools for biodiversity conservation through the regulation of trade in wild fauna and flora. Thousands of species are internationally traded and used by people in their daily lives for food, housing, health care, ecotourism, cosmetics or fashion.

CITES regulates international trade in over 35,000 species of plants and animals, including their products and derivatives, ensuring their survival in the wild with benefits for the livelihoods of local people and the global environment. The CITES permit system seeks to ensure that international trade in listed species is sustainable, legal and traceable.   CITES was signed in Washington D.C. on 3 March 1973.

[1] See background and rationale for this recommendation here /eng/prog/iccwc.php