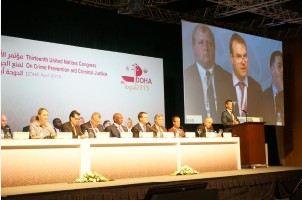 On 3 March, the date of the adoption of CITES, we celebrated UN World Wildlife Day for the second time under the slogan of ‘it’s time to get serious about wildlife crime’. UNGA President Kutesa hosted the first informal plenary session of the General Assembly to address wildlife crime as a part of the day’s events.

We now, for the first time, have the opportunity to draw the attention of this critical Congress, in its 60th year, to the need to treat wildlife crime (including forest) as a serious crime and I would also like to personally thank UNODC and in particular Executive Director Fedotov for arranging this high-level side event.

In many ways, today’s event represents the culmination of 5 years of close collaboration with UNODC and our ICCWC (International Consortium on Combatting Wildlife Crime) partners to have wildlife crime recognized as a serious crime – as defined in the UN Convention Against Transnational Organized Crime (UNTOC) – and I take this opportunity to publicly recognize the inspired leadership of Executive Director Fedotov in this effort and to extend our most sincere thanks to him and his team.

Why do we say wildlife crime should be treated as a serious crime?

It is because the scale and nature of illegal wildlife trade have changed over recent years and so must the global response – and it is responding but more needs to be done.

Illegal wildlife trade is not about local subsistence poaching. Today we are confronted by transnational organized criminals, and in some cases rebel militia and rouge elements of the military, which are driving industrial scale poaching and illegal trade for illicit off shore markets.

This has changed the dynamics of combating this highly destructive criminal activity, in particular as it relates to some mega-fauna, such as elephants, and high-value flora, such as rosewood. It also threatens many lesser know species, such as the pangolin.

The profound impact this poaching and illegal trade is having upon entire species and ecosystems and the services they provide, local peoples and their livelihoods, national economies, and national and regional security is now increasingly well recognized.

Just by way of example, many countries rely upon wildlife-based tourism to generate significant national and local revenue and jobs – and in some States it forms a major part of their GDP.

The degradation of World Heritage Sites across Africa due to poaching for the illicit trade, such as the Selous Reserve in United Republic of Tanzania, is threatening major tourism and economic opportunities.

The situation is serious and in combatting this illegal trade we must use the same sorts of enforcement tools, techniques and penalties used to combat other serious crimes, such as trafficking in drugs or persons.

Rio+20 also recognized the important role of CITES (the Convention on International Trade in Endangered Species of Wild Fauna and Flora), which is recognized as the principal legal instrument that underpins these collective global efforts.

In March 2013, CITES Parties heeded the call from Rio+20 at its 16th meeting of the Conference of the Parties in Bangkok where it took strong, action-oriented decisions to combat illegal wildlife trade that addresses both demand and supply.

The successful implementation of CITES, however, relies upon the contributions and ongoing commitment of, and collaboration between, multiple organizations and initiatives and staff coming from a wide range of disciplines both nationally and internationally – and in particular from within the criminal justice system.

It also demands close collaboration with other legal instruments, such as the UNCTOC and the UN Convention Against Corruption, and CITES Parties have through their resolutions encouraged all CITES Parties to accede to these two critical conventions.

CITES Parties are focused on putting their collective energy into how to solve the problem by working together across the entire illegal supply chain – source, transit and destination States.

The benefits of this collaboration is now increasingly evident – such as the excellent results achieved through Operation Cobra II, a joint enforcement initiative undertaken last year between 28 States across Asia, Africa and North America.

We have also seen five key intergovernmental agencies dealing with wildlife crime form a new alliance in 2010 called the International Consortium on Combating Wildlife Crime (ICCWC), which is supporting multiple national capacity building efforts, many of which Executive Director Fedotov has highlighted.

The UNODC, a member of ICCWC, the UN Development Programme and UN Environment Programme – as well as UNESCO, are all addressing illegal wildlife trade in line with their respective mandates and the implications for sustainable development, and under the leadership of the UN Secretary-General we are seeing a scaled up and coordinated effort.

The issue has also been addressed by the UN Security Council, through an informal plenary session of the UN General Assembly, in the margins of the UN General Assembly at events hosted by Gabon and Germany, by ECOSOC, by the UN Environment Assembly, by the UN Commission on Crime Prevention and Criminal Justice, as well as through multiple regional fora – and local people and civil society from across all regions have been mobilized and are playing an indispensable role.

Today, we warmly welcome the attention given to this critical issue in Doha at the UN Congress on Crime Prevention and Criminal Justice, which draws together States and stakeholders looking at serious crimes across the entire criminal justice system. This is exactly where this critical matter needs to be discussed.

Distinguished delegates, there is much more to be done and the added momentum being generated by wildlife crime being discussed at this UN Crime Congress and being captured in the Doha Declaration is critical to the success of our collective actions.

We warmly welcome the adoption of the Doha Declaration and in particular the references made to wildlife crime on paragraph 9 (e). It serves to show the serious nature of wildlife crime and the need for the entire criminal justice system to give it the same level of attention as other serious crimes.

I conclude by expressing our sincere gratitude to our hosts, the Government and people of Qatar for their generosity and impeccable arrangements – and by expressing our support to the call made by the UN Secretary-General on World Wildlife Day to treat crimes against wildlife as a threat to our sustainable future and to get serious about wildlife crime.