Representatives of Indigenous Peoples and Local Communities, Governments, civil society and the private sector came together to celebrate the role of forest communities and their experiences in conserving the world’s forests.

World Wildlife Day is celebrated this year under the theme "Forests and Livelihoods: Sustaining People and Planet", highlighting the link between the livelihoods, knowledge and experiences of Indigenous Peoples and Local Communities who rely on forests, and the conservation of these ecosystems and the wildlife they harbor. 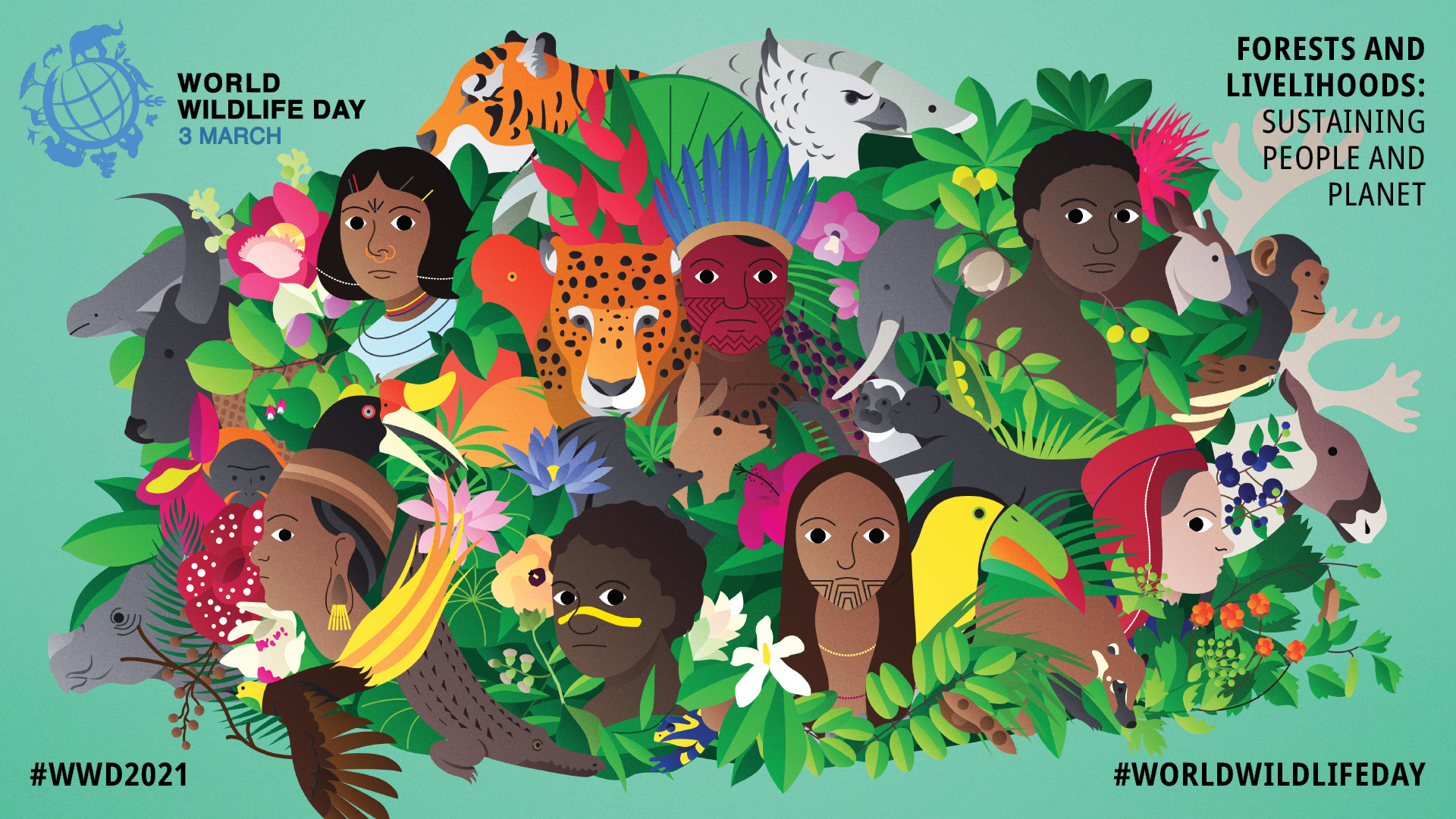 In her welcoming words to speakers and viewers following the event online, Ms. Ivonne Higuero, Secretary-General of the Convention on International Trade in Endangered Species of Wild Fauna and Flora, underlined the importance of this year’s celebration, with its focus on the communities that rely on forests and their wildlife and who have historically acted as their primary custodians. She said the aim of the event was to give a voice to these important stakeholders by sharing their forest conservation knowledge and experiences to inspire the establishment of truly sustainable models of interaction with the planet´s ecosystems and wildlife.

For the first of the remarks at the high-level opening, His Excellency Mr. Federico Tenorio Calderón, Minister for Agriculture and Irrigation of Peru, spoke about the immense value of the Amazon Rainforest for the livelihoods of the communities inhabiting it. Minister Tenorio Calderón emphasized that sustainable use of wildlife not only ensures the survival of species, but also generates the means for the livelihoods of communities that share their habitats.

Ms. Fawn Sharp, President of the Quinault Indian Nation and President of the National Congress of American Indians, spoke of the efforts of Indigenous Peoples and Local communities to preserve the knowledge that has sustained them for millennia.

In her remarks, Ms. Elizabeth Maruma Mrema, Executive Secretary of the Convention for Biological Diversity, said that recognizing the knowledge, innovations and practices of Indigenous Peoples and Local Communities ensures participatory environmental governance for the protection of forests and wildlife.

His Excellency Mr. António Guterres, United Nations Secretary-General, closed the high-level opening with a heartfelt plea to governments, businesses and people everywhere to scale up efforts to conserve forests and forest species, and to support and listen to the voices of forest communities. He called this an urgent step towards the achievement of the Sustainable Development Goals.

The first panel was opened with a message from Ms. Nemonte Nenquimo, founder of the Ecuadorian organization Alianza Ceibo and laureate of the 2020 Equator Prize , who set the scene by illustrating her community’s efforts to sustainably use and conserve forest biodiversity for future generations. The panel was moderated by CITES Secretary-General Ivonne Higuero.

The panelists shared their personal and professional experiences with community-led efforts towards the sustainable use of forests and forest species, and how these contributed to the conservation of these ecosystems.

The second panel opened with a message from another 2020 Equator Prize Laureate, Mr. Albert Lotana Lokasola, Founder and President of Vie Sauvage, an organization based in the Democratic Republic of the Congo. Mr. Lokasola gave highlights of their efforts to combine conservation of endemic forest species in the Congo basin, while also providing sustainable economic opportunities to local communities. The panel moderator was Ms. Adriana Dinu, Deputy Director of the Bureau for Policy and Programme Support at the United Nations Development Programme (UNDP).

For the sixth year running, Jackson Wild™, the CITES Secretariat and UNDP teamed for a Film Showcase based on this year’s theme. The contest attracted nearly 300 entries which brought to life a wide array of compelling stories about the work of communities involved in conserving forests and sustaining themselves through the essential ecosystem services provided by forests and wildlife.

The celebration was also marked by the announcement of the winner of the third World Wildlife Day Youth Art Contest, organized by the International Fund for Animal Welfare (IFAW), the CITES Secretariat, and UNDP.

With over 500 entries, the contest saw school-age children and young artists from over 50 countries produce some truly inspirational works of art, illustrating the deep relationship between people, forests and forest wildlife.

Remarks by organizers, participants and partners:

Mr. QU Dongyu, FAO Director-General: “The growing demand for wildmeat, especially in urban settings, is increasing humans’ exposure to zoonotic diseases and hunting pressure in forests. Wildmeat is an essential source of food for millions of indigenous and rural people, accounting for more than 50 percent of protein intake in many tropical and subtropical regions. But unless hunting and consumption are conducted in a sustainable manner, that supply will gradually diminish, with serious implications for food security. Already, recent studies estimate that 285 mammal species are threatened with extinction due to hunting for wildmeat. At FAO, we know that efficient food production must co-exist with biodiversity conservation if there is to be any real hope of ending poverty and hunger. To achieve those objectives, we advocate for more efficient, inclusive, resilient and sustainable agri-food systems that feed humanity.”

Mr. Achim Steiner, UNDP Administrator: “This year‘s World Wildlife Day celebration highlights the important links between smarter forest management policies and broader efforts to strengthen jobs and livelihoods for indigenous peoples and local communities. Nearly 1 billion people depend on forest foods, some 2.4 billion people use wood-based energy for cooking, and 1.2 billion people are dependent on agroforestry farming systems, while the formal forest sector provides an estimated 45 million jobs globally. There is an urgent need in 2021 to raise global levels of ambition and increase investments in the sustainable management of forest ecosystems if we are to meet the objectives of the Paris Agreement, the evolving global Biodiversity Framework, and 2030 Agenda.”

Mr. Alexander Trepelkov, Officer-in-Charge of the UN Forum on Forests Secretariat: “The value of forests in supporting livelihoods, preserving biodiversity and regulating climate is undeniable.  As the global community works towards a new development paradigm that integrates care for people and the planet based on the “one health” approach, the theme of this year’s World Wildlife Day underscores the vital role of forests for a sustainable future for all.”

Ms. Lisa Samford, Executive Director of Jackson Wild™: "The power of personal storytelling to inspire individual, community and systemic change has never been more important. As we’ve been increasingly isolated during this pandemic, the global impact of media to share these compelling stories has helped connect each of us to our planet and to one another to address the massive impacts of climate change and accelerate equity in our world."

Mr. Azzedine Downes, President and CEO of IFAW: “On global days of unity and celebration such as World Wildlife Day, the inherent interconnectedness between mankind and the natural environment becomes ever clearer. From the individual to the local community to the broader global community, we must all empower by inclusion and fulfill our role as stewards of the natural world. This year’s theme of ‘forests and livelihoods’ is a vivid reminder of just how fundamental the health of the natural environment is to our own. We look forward to continuing to participate with both CITES and UNDP on such celebrations well into the future.”

About CITES
The Convention on International Trade in Endangered Species of Wild Fauna and Flora (CITES) was signed on 3 March 1973 and entered into force on 1 July 1975. With 183 Parties (182 countries + the European Union), it remains one of the world's most powerful tools for wildlife conservation through the regulation of international trade in over 38,000 species of wild animals and plants. CITES-listed species are used by people around the world in their daily lives for food, health care, furniture, housing, tourist souvenirs, cosmetics or fashion. CITES seeks to ensure that international trade in such species is sustainable, legal and traceable and contributes to both the livelihoods of the communities that live closest to them and to national economies for a healthy planet and the prosperity of the people in support of UN Sustainable Development Goals.

About UNDP
UNDP is the leading United Nations organization fighting to end the injustice of poverty, inequality, and climate change. Working with our broad network of experts and partners in 170 countries, we help nations to build integrated, lasting solutions for people and planet. Learn more at undp.org or follow at @UNDP.

About the United Nations World Wildlife Day
On 20 December 2013, the 68th session of the United Nations General Assembly proclaimed 3 March as World Wildlife Day to celebrate and raise awareness of the world’s wild fauna and flora. The date is the day of the signature of the Convention on International Trade in Endangered Species of Wild Fauna and Flora (CITES) in 1973. World Wildlife Day has quickly become the most prominent global annual event dedicated to wildlife. It is an opportunity to celebrate the many beautiful and varied forms of wild fauna and flora and to raise awareness of the various challenges faced by these species. The day also reminds us of the urgent need to step up the fight against wildlife crime, which has wide-ranging economic, environmental and social impacts.