Geneva, 23 June 2014 –  At its 38th Session held in Doha last week, the World Heritage Committee expressed its utmost concerns about the impacts of poaching and the associated illicit wildlife trade on World Heritage  sites and called for strengthened cooperation with the Convention on International Trade in Endangered Species of Wild Fauna and Flora (CITES).

At the same meeting the Selous Game Reserve in Tanzania was (with the concurrence of Tanzania) included on the list of World Heritage Sites in Danger, owing to the poaching crisis affecting this reserve. Large numbers of elephants, black rhinos, cheetahs, hippos and crocodiles live in this immense sanctuary, which measures 50,000 Km2. Selous game reserve joins seven other Sites already on the In Danger list. 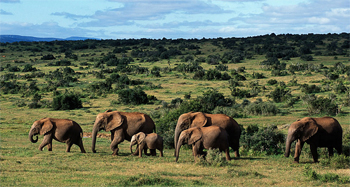 Half of the 14 African World Heritage sites monitored under the CITES Monitoring the Illegal Killing of Elephants (MIKE) programme are now on the “in danger” list, namely Comoé (Cote d`Ivoire), Niokolo-Koba (Sénégal); Garamba, Kahuzi-Biega, Salonga and Okapi (all in the DRC) and Virunga (DRC and Uganda).  The CITES Secretariat is working with the UNESCO World Heritage Centre to better protect these iconic sites.

Selous Game Reserve is a site monitored by CITES under its  Monitoring the Illegal Killing of Elephants (MIKE) programme, which was established at the 10th meeting of the Conference of the Parties to CITES (Harare, 1997). The government estimates that the elephant population in the Selous and Mikumi game sanctuaries has declined from 38,975 in 2009 to an estimated 13,084 today and CITES estimates that in the past year alone, over 20,000 elephants were illegally killed in Africa.

The decision adopted by the World Heritage Committee followed the Director General of UNESCO, Ms Irina Bokova, and the Secretary-General of CITES, Mr John E. Scanlon, jointly expressing concerns in 2013 over the impacts of poaching and related illicit wildlife trade on World Heritage sites in Africa.

"The collaboration between CITES and the World Heritage Convention is pragmatic and targeted on critical sites that are being decimated by poaching for the illicit wildlife trade.  Our collaboration has strengthened over the past two years, and will now be further enhanced to help States in implementing CITES decisions," said Mr Scanlon.

The decision of the Committee states:

"Reiterating its utmost concern about the continued impacts on World Heritage properties due to the rising pressure from poaching, particularly of elephant, rhinoceros, and valuable timber species, linked to a growing illicit trade, and the increasing involvement of organized crime in this lucrative business, reiterates its request to the World Heritage Centre and IUCN to strengthen their cooperation with the Secretariat of the Convention on International Trade in Endangered Species (CITES) to assist States Parties to implement the measures taken by the 16th Conference of the Parties of the CITES, and urges States Parties to ensure strong international collaboration and coordination to control the illicit trade in flora and fauna and their products".

All documents related to the 38th session of the World Heritage Committee are available at http://whc.unesco.org/en/sessions/38COM

The document with the decision is available at: http://whc.unesco.org/archive/2014/whc14-38com-7-en.pdf

With 180 Member States, CITES remains one of the world's most powerful tools for biodiversity conservation through the regulation of trade in wild fauna and flora. Thousands of species are internationally traded and used by people in their daily lives for food, housing, health care, ecotourism, cosmetics or fashion.