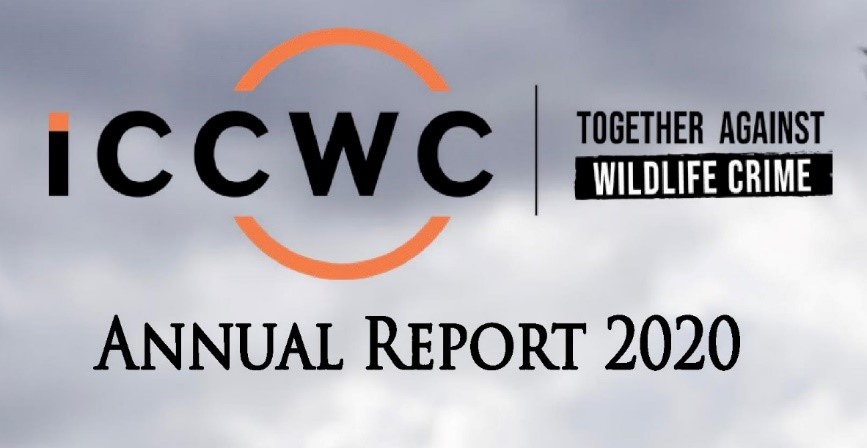 The International Consortium on Combating Wildlife Crime (ICCWC) has launched its Annual Report for the year 2020, titled Together Against Wildlife Crime.

The report showcases how the Consortium’s partnerships with Member States and other stakeholders have helped enhance the capacity of customs, police, wildlife authorities and the entire criminal justice system, enabling a strong, consistent, coordinated and increasingly effective response to wildlife crime.

The ICCWC Annual Report 2020 showcases ICCWC’s collective resolve, working throughout 2020 to enhance capacity and bring coordinated support to national agencies, sub-regional and regional networks from around the globe to combat wildlife crime.

The report provides examples of how ICCWC assessments have led to positive changes in penal codes, where technical support has helped build capability, where operational support contributed to the arrest and prosecution of criminals involved in wildlife crime, and many others.

The ICCWC Annual Report 2020 notes that despite the global pandemic, the threat of wildlife crime continued in 2020. So too has ICCWC’s collective resolve to provide law enforcement authorities responsible for wildlife law enforcement  with the tools, services and technical support they need to address and respond to these forms of crimes.

The annual report also highlights the 10-year anniversary of the Consortium, as partners marked ICCWC’s first decade of action in November 2020. It further looks to the future, acknowledging that despite considerable effort by the global community, wildlife crime remains a significant threat. Wildlife crime is serious organized crime, involving criminal networks and at times converging with other illicit activities such as violence, corruption, fraud and money laundering, presenting law enforcement authorities with an increasingly difficult and complex task in addressing it. Illegally traded wildlife specimens also evade veterinary checks and sanitary safety inspections, thus increasing the risk of disease emergence.

Tackling a problem of such magnitude requires a coordinated, holistic national, regional and global response. ICCWC partners are committed to continue to work collaboratively to tackle the ongoing challenges posed by wildlife crime and the Consortium is currently in the process of developing an ambitious vision towards a world free of wildlife crime.

The ICCWC Vision 2030 is committed to continuing and further enhancing the fight against wildlife crime, engaging and empowering those on the frontline, working with and supporting our Member States to better deter, detect, detain, and dismantle the criminal networks involved in these crimes.

Here is a snapshot of some activities showcased in the ICCWC Annual Report 2020:

Operation Thunder:
Under the auspices of ICCWC, INTERPOL and WCO led Operation Thunder 2020, the fourth in a series of joint customs and police operations, following operations Thunderbird (2017), Thunderstorm (2018) and Thunderball (2019). These global operations have led to the apprehension of more than 3,500 suspects. Despite the COVID-19 restrictions imposed across the world, Operation Thunder 2020 saw coordinated raids at airports, borders and other hotspots in 103 countries. Law enforcement and customs officers seized over 2,000 protected wildlife species and apprehended 699 offenders. Several active INTERPOL Red Notices are a result of information gained during the operation. There have been further arrests and prosecutions are ongoing as global investigations build cases against the networks that lead the illegal trade.

Wildlife Enforcement Networks (WENS):
ICCWC produced guidelines for developing and strengthening Wildlife Enforcement
Networks (WENs). The guidelines include a self-assessment tool for existing WENs to evaluate their operational performance and identify areas that could be strengthened. ICCWC is further supporting the strengthening of regional cooperation in South America (Sud-WEN) and in the Horn of Africa (HAWEN).

About ICCWC:
The International Consortium on Combating Wildlife Crime (ICCWC) is a unique partnership of five intergovernmental organizations to help law enforcement bring criminals engaged in wildlife crime to justice.

Through technical assistance, tools, training, and operational support, ICCWC works along the entire criminal justice chain, building the capacity of frontline law enforcement in countries and regions around the world affected by wildlife crime.

The ICCWC partners are the Secretariat of the Convention on International Trade in Endangered Species of Wild Fauna and Flora (CITES), the International Criminal Police Organization (INTERPOL), the United Nations Office on Drugs and Crime (UNODC), the World Bank Group (WBG) and the World Customs Organization (WCO).

The work delivered by Consortium through the ICCWC Strategic Programme 2016-2020 has been made possible by the generous financial support of the European Union, France, Germany, the Principality of Monaco, the United Kingdom of Great Britain and Northern Ireland and the United States of America.

Find out more about ICCWC and its tools and services on this link.