Geneva, 7 May 2021 - Over half of all CITES Parties and more than 100 observer organizations took part in the 73rd meeting of the CITES Standing Committee, on May 5-7, marking the first time a CITES governing body convened a formal meeting in an online format. Committee members, Parties and observers discussed a broad selection of issues affecting the implementation of the Convention, including: 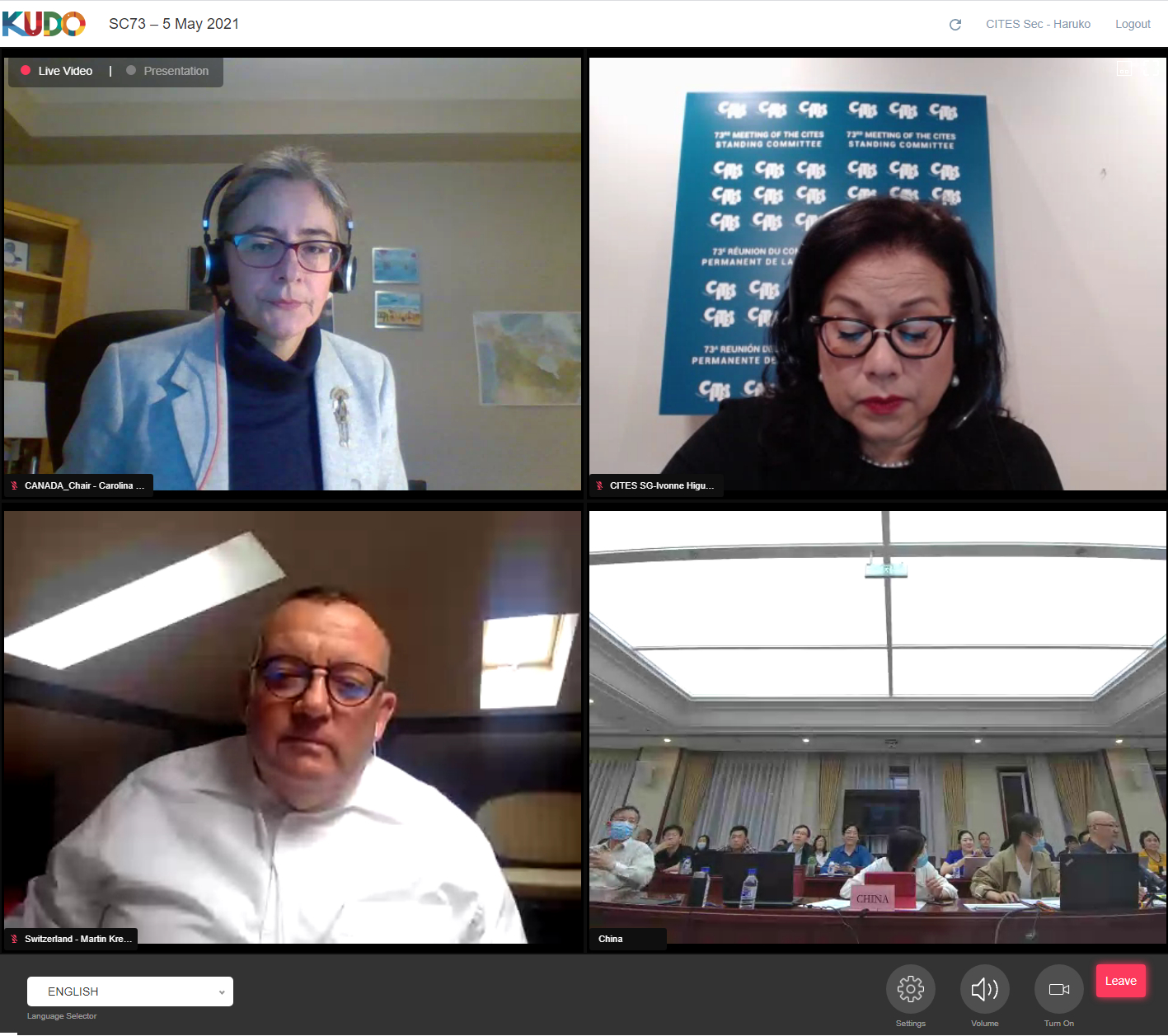 The meeting’s agenda and information documents for all items are available on this link.

The meeting was marked by a historically high attendance with over 800 participants registered, drawn from 100 Parties and 111 observer organizations. This represents a total participation 50% higher than the previous best-attended meeting of the Standing Committee.

Registration requests also included a number of Parties that had been unable to send representatives to previous face-to-face meetings of the Standing Committee.
All three sessions of the meeting were also streamed on YouTube, making them further accessible to interested stakeholders and the general public. The sessions were broadcast live in English, French and Spanish, the three working languages of the Convention, and they are and will remain available on the CITES YouTube channels on the following links:

For CITES Secretary-General Ivonne Higuero, this first formal meeting since the start of the COVID-19 pandemic was a success and an important milestone for the Convention. "This successful online meeting marks a historic moment for the Convention and it truly sets an encouraging precedent for Parties, Governing Bodies and the Secretariat. Committee Members, Parties and observers managed to adapt and carry out important discussions in a smooth way despite the challenges posed by the new format. The remarkably high attendance and the amount of issues covered bode well for the upcoming meetings of the Animals and Plants Committees and the remaining intersessional work ahead of CoP19, next year. We are grateful to all participants for the strong commitment they all displayed towards fulfilling the mandate of the Convention despite the current circumstances."

For Standing Committee chair Carolina Caceres, Parties and observers’ participation has ensured the smooth resumption of CITES processes despite the 2020 hiatus: “I thank the Committee members, working groups and all Parties and observers involved in the run-up to this meeting for their continued dedication to their mandates. This online meeting allowed us to cover a substantial number of issues, some of which were overdue. Though we might not have covered all items on the agenda, Committee members, Parties and observers have taken a significant step in reinforcing the Convention’s implementation despite challenging circumstances”.

About CITES
The Convention on International Trade in Endangered Species of Wild Fauna and Flora (CITES) was signed on 3 March 1973 and entered into force on 1 July 1975. With 183 Parties (182 countries + the European Union), it remains one of the world's most powerful tools for wildlife conservation through the regulation of international trade in over 38,000 species of wild animals and plants. CITES-listed species are used by people around the world in their daily lives for food, health care, furniture, housing, tourist souvenirs, cosmetics or fashion. CITES seeks to ensure that international trade in such species is sustainable, legal and traceable and contributes to both the livelihoods of the communities that live closest to them and to national economies for a healthy planet and the prosperity of the people in support of UN Sustainable Development Goals.