European Union invests 30 million Euro to counter the illegal killing and trafficking of wildlife in Southern, Eastern Africa and the Indian Ocean

European Union invests 30 million Euro to counter the illegal killing and trafficking of wildlife
in Southern, Eastern Africa and the Indian Ocean

Geneva/Nairobi, 5 December 2017 -  As part of a 30 million Euro intervention, the European Union today signed a 17.2 million Euro agreement with three UN institutions working jointly to reduce the illegal killing of wildlife and the trafficking of wildlife products throughout Eastern and Southern Africa and the Indian Ocean. The new ‘cross-regional wildlife programme’ will focus its activities in the regions’ most important protected areas, national transit points, and in some of Africa’s most important transboundary ecosystems. 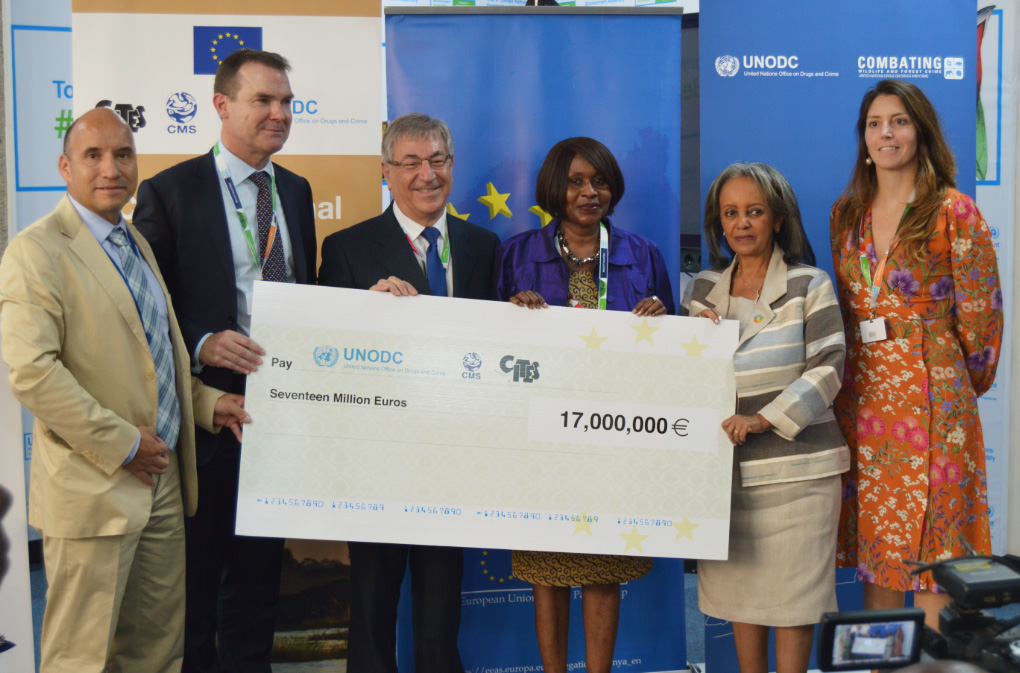 After signing the agreement at the United Nations Headquarters in Africa, Mr. Stefano A. Dejak, the European Union ambassador to Kenya said ‘"Illegal killing and trafficking of wildlife now runs into billions of dollars. To combat it, we need find new ways to work together more effectively. This new initiative brings together the European Union and the United Nations Office on Drugs and Crime, as well as the Convention on International Trade in Endangered Species and the Convention on Migratory Species. The aim is to build on our various strengths and experiences in protecting wildlife across borders."

“The Director-General of the United Nations Office at Nairobi (UNON), Ms. Sahle-Work Zewde, said “As we move rapidly towards 2030 - Providing technical assistance to Member States as they strive to achieve the bold targets of the sustainable development goals is a challenge of scale.  Goal 15 is no exception and the European Union, with its generous financial contribution, is helping ensure that the children of Africa will be able to witness the magnificent diversity its land has to offer.”

Mr. John Scanlon, Secretary General of CITES added that "CITES is delighted to continue its longstanding, positive relationship with the European Union. This new initiative enables us to enhance our current work and expand our support to those who are serving in the front-line to stop the illegal killing of Africa’s wildlife. It also strengthens the links between CITES and CMS, the world’s wildlife conventions, in a highly effective manner and draws upon the expertise of UNODC and our other ICCWC (International Consortium on Combating Wildlife Crime) partners."

After the signature of the agreement, UNODC’s Regional Coordinator for the Wildlife and Forest Crime programme, Mr. Javier Montano, said “the comprehensive approach of this programme, will certainly go a long way in bringing systemic change as well as enhancing the criminal justice responses to wildlife crime in the regions”.

Laura Cerasi, representing CMS on behalf of its Executive Secretary, Mr. Bradnee Chambers said ‘CMS looks forward to working with CITES and UNODC and others across Eastern and Southern Africa, to strengthen management in some of the continent’s most important transboundary conservation areas. This project significantly supports the delivery of the joint CITES and CMS work plan and the outcomes of CMS CoP 12 held in Manila last month.’.

About the EU:  The EuropeanUnion (EU) is a political and economic union of 28 member states that are located primarily in Europe. The EU and its members account for over half of all development aid, making them the largest donor in the world. Over the years, the EU has supported many countries in their efforts to eradicate poverty and create a better future for their people.

About UNODC:UNODC is a global leader in the fight against illicit drugs and international crime. Established in 1997 through a merger between the United Nations Drug Control Programme and the Centre for International Crime Prevention, UNODC operates in all regions of the world through its network of field offices.

About CITES: With 183 Member States, CITES is one of the world's most powerful tools for biodiversity conservation. CITES regulates international trade in over 35,000 species of plants and animals, ensuring their survival in the wild with benefits for the livelihoods of local people and the global environment.

For further information and to arrange interview, please contact: