News and highlights
For use of the media only;
not an official document.

Geneva, 2 April 2014 – The Governments of Nicaragua, Pakistan and the Russian Federation have requested the Secretariat of the Convention on International Trade in Endangered Species of Wild Fauna and Flora (CITES) to list sixteen new species in CITES Appendix III, including high-value timber species, mammals and birds. The new listings will enter into force on 24 June 2014. 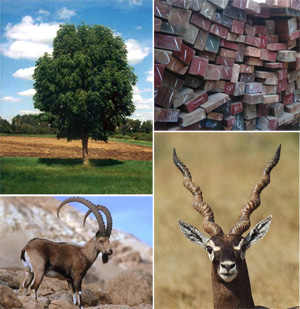 The listing of the tree species Mongolian oak (Quercus mongolica) and Manchurian ash (Fraxinus mandshurica) by the Russian Federation, Yucatan rosewood (Dalbergia tucurensis) by Nicaragua and thirteen species of animals by Pakistan in CITES Appendix III means that all cross-border shipments of specimens covered by the listing will have to be authorized by the issuance of a document certifying the legal origin of the products covered by the listing.

Commenting on the new listings, CITES Secretary-General, Mr John Scanlon said: “The requests of the Governments of Nicaragua, Pakistan and the Russian Federation to include these species in Appendix III show that range States are increasingly recognizing the value of CITES in ensuring legal and traceable international trade at both ends of the value chain. ”

The illegal logging and uncontrolled trade of the Mongolian oak and the Manchurian ash, two valuable hardwood species, in the Far East Primorsky and Khabarovsky Provinces, is leading to the degradation of forests in the range of the Amur tiger.  Oak trees are a key source of food for animals such as the wild boar, which in turn are prey for the Amur tiger and Far Eastern leopard. Ash is often found in floodplain forests, which are key habitats both for big cats and their prey. This new measure to control international trade could therefore provide multiple benefits.

Nicaragua has requested the help of CITES Parties to control the trade in the Yucatan rosewood, a species from Central America used in the timber industry. This wood closely resembles a number of other rosewood species that are already protected under CITES. This fact makes trade controls very difficult for Customs officers.

At the same time, Pakistan has requested the cooperation of other Parties in the control of trade in  thirteen animal species that will be included in Appendix III. Pakistan is blessed with a great variety of unique mountain species.

The blackbuck (Antilope cervicapra) is the only living species of the genus Antilope. Their range decreased sharply during the 20th century and they are now extinct in Bangladesh, Nepal and Pakistan. Attempted reintroductions have taken place in Pakistan and Nepal which now have their reintroduced populations in Appendix III.

The nilgai (Boselaphus tragocamelus), sometimes called the blue bull, is one of the most commonly seen wild animals of central and northern India, often seen in farmland or scrub forest. Hunting and habitat destruction have had an adverse effect in Pakistan.

The Sind wild goat (Capra hircus aegagrus) lives in the Baluchistan plateau and its foothills in south-western Pakistan. The major threats to this species are poaching, competition for food with domestic livestock, and disturbance and habitat loss from logging and land clearing.

The Siberian ibex (Capra sibirica) is a species of ibex that lives in central, northern and Southern Asia. It is the longest and heaviest members of the genus Capra, though its shoulder height is surpassed by the markhor.

The chinkara or Indian gazelle (Gazella bennettii) is a species of gazelle normally found in southern Asia. The chinkara lives in arid plains and hills, deserts, dry scrub and light forests in India, Pakistan and the Islamic Republic of Iran. Numbers in Pakistan have been severely reduced by overhunting.

The bharal, Himalayan blue sheep or naur (Pseudois nayaur) is a caprid found in the high Himalayas of Nepal, China, India, Pakistan, and Bhutan. The bharal is a major food of the snow leopard. In Pakistan, limited range and low numbers make the blue sheep vulnerable to poaching and habitat loss. When access to the Shimshal valley is opened by construction of a jeep road, the species will most probably come under increased hunting pressure.

The hog deer (Axis porcinus) is confined to isolated riverine grasslands along the Indus valley and its upper tributaries, mostly in the Indus River forest reserves of Sind Province, with small populations around the Indus mouth and to the north of Sukkur. The hog deer is threatened by hunting and by habitat loss and degradation.

Appendix III includes all species which any Party to the Convention identifies as being subject to regulation within its jurisdiction for the purposes of preventing or restricting exploitation, and as needing the co-operation of other Parties in the control of trade.  Inclusion in Appendix III is undertaken at the specific request of the State of origin and does not require a decision of the Conference of the Parties.