Geneva, 28 August 2019 – The triennial World Wildlife Conference, known formally as CoP18 of the Convention on International Trade in Endangered Species of Wild Fauna and Flora (CITES), concludes here today after adopting an impressive list of decisions advancing the conservation and sustainable use of wildlife across the globe.

The Conference revised the trade rules for dozens of wildlife species that are threatened by unstainable trade linked to overharvesting, overfishing or overhunting. These ranged from commercially valuable fish and trees to charismatic mammals such as giraffes to amphibians and reptiles sold as exotic pets.

Continuing the trend of using CITES trade quotas and permits to promote sustainable commercial fisheries, the conference decided to add 18 more shark species to Appendix II. They included blacknose and sharpnose guitarfishes, which are highly valued for their fins and considered endangered by the IUCN Red List of Threatened Species. Shortfin and longfin mako sharks, together with white-spotted and other species of wedgefishes, were also listed in Appendix II.

Other marine species addressed by the conference included eels, teatfish (sea cucumber), queen conch, marine turtles, precious corals, sturgeons and seahorses. Governments furthermore agreed to examine the trade in live ornamental marine fish to assess what role CITES could or should play in regulating this trade.

Tropical timber trees comprise another wildlife market of high commercial value. Responding to high and increasing demand for African teak from western Africa, CITES broadened the need for trade permits to include plywood and other forms.  Malawi’s national tree, the rare Mulanje cedar, and the slow-growing mukula tree (a type of rosewood) of southern and eastern Africa, were also added to Appendix II. All Latin American species of cedar were listed in Appendix II.

The conference amended an earlier Appendix II listing of rosewoods and related tree species to ensure that small finished items, including musical instruments, parts and accessories, could be carried across borders without the need for CITES permits.

Noting that giraffes have declined by 36-40% over the past three decades due to habitat loss and other pressures, the conference added the world’s tallest animal to Appendix II. Asia’s smooth-coated and small-clawed otters, threatened by habit loss and possibly by trade in live animals, were transferred from Appendix II to Appendix I, which prohibits all commercial trade in the species that it lists.

Because the growing exotic pet trade has put enormous pressure on many species of turtle, lizard and gecko, CITES added a range of these species to the Appendices.

Many countries and their CITES Management Authorities lack the necessary financial and institutional capacity to sustainably manage and conserve their wildlife. The conference took decisions promoting capacity building and other activities aimed at strengthening wildlife management and compliance with and enforcement of CITES trade rules.

In addition, the critical role of local and indigenous communities that live on the frontlines of wildlife conservation and sustainable management, and their need for adequate incomes and livelihoods, was widely recognized.  Overcoming a wide range of differing views, the conference asked Parties to begin considering how to best engage indigenous peoples and local communities in CITES decision-making and implementation. The aim is to better achieve the objectives of the Convention while recognizing those people whose use of CITES-listed species contributes significantly to their livelihoods.

“Humanity needs to respond to the growing extinction crisis by transforming the way we manage the world’s wild animals and plants. Business as usual is no longer an option,” said CITES Secretary-General Ivonne Higuero.

“CITES conserves our natural world by ensuring that international trade in wild plants and animals is legal, sustainable and traceable. Well-managed trade also contributes to human wellbeing, livelihoods and the achievement of the 2030 Sustainable Development Goals,” she said.

The conference reviewed progress on the implementation of previous measures aimed at ensuring the conservation and sustainable management of already-listed species, such as European eels, sharks, rosewood, great apes and songbirds. These reviews often took advantage of new data and information on population trends, trade levels and national plans and actions.

On the sidelines of CoP18, the Third Global Meeting of Wildlife Enforcement Networks brought together over 105 representatives from WENs, law enforcement bodies, international organizations and other stakeholders. The participants focused on further strengthening their collaborative efforts. 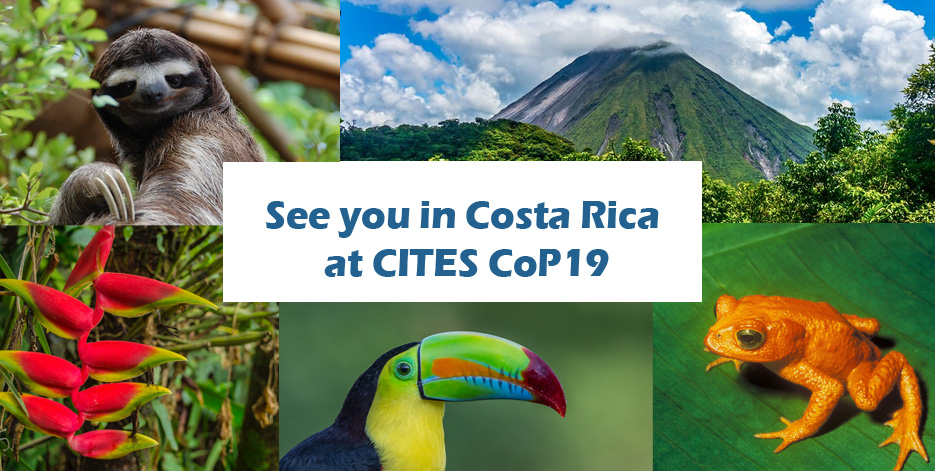