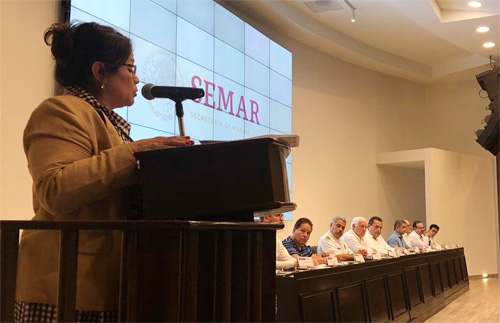 Geneva, 30 May 2019 – Today concludes the high-level mission of CITES Secretary-General Ivonne Higuero to Mexico in response to a request from the CITES Standing Committee and a subsequent invitation by the Mexican Government.  The Secretary-General discussed with the Mexican Government and relevant stakeholders the critical status of the endemic vaquita porpoise with as few as 10-30 left in the world as a result of illegal trade in totoaba.

On 28 May, a wide range of Mexican governmental agencies, other key stakeholders, and the CITES delegation met during a one-day high-level event organized by the Mexican Ministry of Environment (SEMARNAT) and hosted by the Mexican Navy in La Paz, Mexico. Secretary-General Ivonne Higuero said: “Mexico’s excellent reputation in conservation of biodiversity and CITES regulations is being undermined by the current international wildlife crime, which is organized similar to other international criminal activities, for example, the narcotics and arms trade. (…) The story of the totoaba and the vaquita is now being told in the media and films, and those concerned and courageously battling wildlife crime are asking CITES Parties to avoid that for the first time in the Convention’s history, a species would go extinct through the impacts of illegal trade.”

Both the totoaba (a large fish), and the vaquita (the world’s smallest cetacean), occur only in Mexico’s Gulf of California, where they share the same habitat. The totoaba is targeted because of international demand for its swim bladder, in particular in Asian markets. Both species are fully protected in Mexico and international trade is prohibited under CITES. Totoaba poachers illegally set gillnets in which vaquitas and other marine wildlife are incidentally entangled. Due to the very high value of the swim bladders, the situation escalated considerably with the involvement of organized crime and an influx of illegal fishers, resulting in the vaquita population to plummet to near-extinction, and further endangering the totoaba.

Discussions at the high-level meeting focused on current actions to prevent illegal fishing and deter illegal international trade in totoaba swim bladders, protect the vaquita refuge area (the so-called polygon), and restore totoaba populations. The Mexican Ministries of Agriculture and Rural Development (SADER), Navy (SEMAR), Public Security and Citizen Protection (SSP) and the Office of the Attorney General (FGR), in coordination with other governmental agencies at the meeting, presented their many activities in the Gulf of California, highlighting how each of these supported the implementation of CoP17 Decisions concerning totoaba and vaquita.

Likewise, Mr. Carlos Mendoza Davis, Governor of Baja California Suremphasized the activities implemented at the state level, which are focused on responsible fisheries management, and strengthening fishers capacities to avoid detrimental impacts on species protected by environmental laws, including those listed in CITES.

The highlight of the meeting was the introduction by deputy Ministers of Environment (SEMARNAT) and of Agriculture and Rural Development (SADER) —Mr. Sergio Sanchez Martinez and Mr. Miguel Garcia Winder— of a new “Initiative for sustainability in the Northern Gulf of California”, a promising integrated development plan focusing on regional governance and security, wellbeing of local communities, responsible fishing, conservation of ecosystems and wildlife, and diversifying local economies. This initiative is expected to be implemented by all relevant government agencies, in close collaboration with a wide range of local stakeholders, to improve the economic, social and ecological sustainability of the northern Gulf of California in an integrated manner and ensure sustainable livelihoods and wellbeing for the local communities.

On a similar note, Mr. Leonel Cota-Montaño, deputy Secretary of Public Security, highlighted the importance that the Gulf of California represents for conservation at a global level, particularly due to its role as host of migratory marine species, such as sharks, marine turtles, and whales. He noted how a significant portion of the marine wildlife sought after in Asian markets have their origin in the Gulf, and provided examples as to how the local fisheries communities have contributed to the recovery of marine species in the region. This led Mr. Cota-Montaño to conclude that “in order to succeed in the conservation of vaquita, it is crucial to involve the local communities in the conservation initiatives”.

The large participation of so many relevant agencies in a whole government approach is very positive. The CITES Secretariat now looks forward to the further development of this promising Initiative in the run-up to the 18th meeting of the Conference of  the Parties (CoP18) to identify clear timelines and responsibilities for implementing each of the activities, ensure strong commitments on the part of collaborating agencies, and facilitate the commitment of the necessary financing from national and international sources. The Secretariat reiterates that in addition to the Initiative, species-specific actions are needed on a short term basis.

“First and foremost it is necessary to ensure full compliance with both national and international legislation in the affected region through vigorous, sustained and effective enforcement efforts, resulting in the arrest and prosecution of those involved in illegal activities and significant reduction in illegal activities currently observed. This is essential to enabling that the elements relating to conservation, local livelihoods and social development can be properly deployed”, Secretary-General Higuero added in her remarks.

The Secretariat highlighted that it stands ready to support Mexico and work with all relevant agencies, stakeholders, partner organizations and Parties to provide resources and capacity building within its means and mandate. It also exchanged views on the measures regarding vaquita and totoaba that the Conference of the Parties could adopt at CoP18 to stop illegal trade and in support of their conservation.

Equally important to activities in Mexico is international collaboration. Many of the participants brought up the issue of how this problem involved also transit and destination countries who needed to work on solutions with Mexico. Secretary-General Higuero noted that the past collaboration concerning illegal trade in Totoaba swim bladders between Mexico, China and the United States of America is commendable. The Secretary-General committed to convening a second meeting of the three countries in the near future to reinvigorate and further strengthen efforts to deal with both supply and demand related to illegally sourced totoaba swim bladders.

Secretary-General Higuero issued a rallying call:  “I hope all of you will be remembered years from now as the decision-makers that set the stage for the successful conservation of vaquita and totoaba –both are  endemic and iconic species of the Upper Gulf of California, the beautiful Sea of Cortez, the aquarium of the world.”