From 22 to 29 November, CITES Secretary-General Ivonne Higuero paid her first official visit to China since she took office in December 2018. During the one-week visit, the Secretary-General met with the Ministry of Foreign Affairs, Ministry of Agriculture, Customs General Administration and the National Forestry and Grassland Administration (NFGA). She also made a field visit to observe customs authorities in action at the Huangpu Port near Guangzhou and met leading internet companies in Beijing to hear of their efforts in combating illegal trade in wild animals and plants. 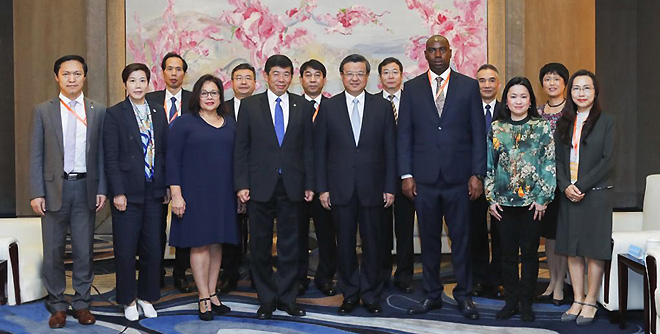 During her meetings with Minister Ni Zhifeng of China Customs, Vice Administrator Li Chunliang of NFGA and high-level officials of other relevant Ministries, the Secretary-General recognized the efforts made by China in compliance and enforcement of the Convention and discussed the remaining challenges.  She encouraged China, as a major economy of the world and with technological advantage in certain areas, to  be a leaders in CITES compliance and enforcement. She also highlighted the importance of giving equal priority to combating wildlife trafficking and regulating legal trade since well-managed and sustainable trade in wild fauna and flora contributes to local livelihoods, national economy and achievement of the United Nations Sustainable Development Goals (SDGs).

During meetings with the Ministry of Foreign Affairs and other Ministries, the Secretary-General was given the assurance of China’s commitment to CITES implementation and environmental sustainability in general. In her meeting with the Ministry of Foreign Affairs, the Secretary-General connected China’s commitment to CITES with its overall commitment to “living in harmony with nature” as the host country of 15th Meeting of the Conference of the Parties to the Convention on Biological Diversity and “ecological civilization,” a national priority of China under the leadership of President Xi Jinping. She also discussed with the Ministry of Foreign Affairs the development of the post 2020 Strategic Vision of CITES and the importance for Multilateral Environmental Agreements to work together to achieve biodiversity goals and SDGs.

Timber, totoaba and European eel were among the species the Secretary-General called for more efforts in combating illegal trade, including through enhanced law enforcement to increase deterrence and strategies to reduce demand for illegally-sourced wildlife products. Vaquita, the world's smallest and most endangered porpoise found only in Mexico's Gulf of California, is being wiped out due to bycatch in the illegal harvesting of totoaba. According to some estimates, there are as few as 20 vaquitas left in the wild. During her meeting with the Director-General of the Fishery Department of Ministry of Agriculture, the Secretary-General warned that vaquita can be the first CITES species to go extinct because of international trade if immediate and effective measures were not taken by range, transit and destination countries. China, as a key destination country of totoaba, must work with source and transit countries to scale up efforts to save the species. The Ministry of Foreign Affairs promised to include totoaba swim bladders in its text message to Chinese travelers to other countries, which warns them to not purchase any illegal wildlife products while abroad.

During the meeting with NFGA, which hosts the CITES Management Authority, the Secretary-General learned that NFGA has submitted its proposal to uplist pangolins from Class II Nationally Protected Species to Class I, which means commercial domestic trade in the species will be prohibited in the country. 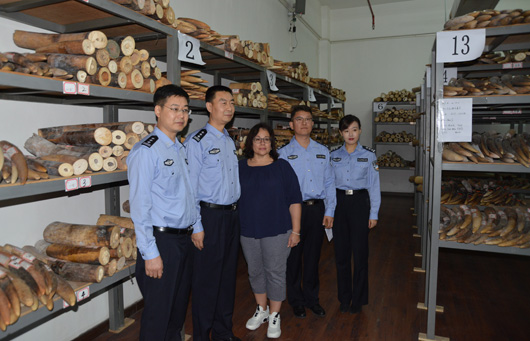 In her visit to Huangpu Port near Guangzhou, the Secretary-General saw over 11 tonnes of ivory seized by Customs in 2013 and 2019 in two connected cases and they showed how the seizures were followed up and criminals are being pursued. In the 2019 case, a task force led by the headquarters of China Customs involved 238 customs officers in 6 provinces. The Secretary-General was also invited to observe the real time scanning of goods with the assistance of artificial intelligence and machine learning, which not only greatly improved the efficiency of detecting contrabands but also the accuracy. Illegal products can be detected in a matter of a few seconds. The Secretary-General encouraged China to consider sharing such technology with other Parties in CITES.

While in Beijing, the Secretary-General visited Tencent and Sina – two leading internet companies. WeChat and Weibo are examples of the services provided by the two companies, respectively. Tencent has so far detected over 1 million activities involving illegal wildlife trade on its platforms. They said that over 6,000 accounts have been closed and 128 criminals arrested with a value of seized products of USD 2.8 million. Both companies are members of the Global Alliance to Combat Wildlife Crime on the Internet, an initiative led by China which now includes global giants such as Google, eBay, and Facebook. The Secretary-General suggested that both companies consider participating in the work of the inter-sessional working group of the Standing Committee on wildlife crime linked to the internet.

China has organized over 10 training seminars on CITES implementation for countries from Asia and Africa, each lasting three weeks. During the meeting China agreed to work more closely with the Secretariat in the organization of such training seminars, including the selection of participants and topics in line with CITES decisions.

During the one week visit in China, the Secretary-General also attended a FAO-led meeting on sustainable timber trade in the context of the Sustainable Wood for a Sustainable World (SW4SW) initiative in Nanning, Guangxi Autonomous Region and the Debriefing of Operation Thunderball, led by the World Customs Organization and Interpol as partners of ICWCC in Shenzhen, Guangdong Province.