Opening remarks at the 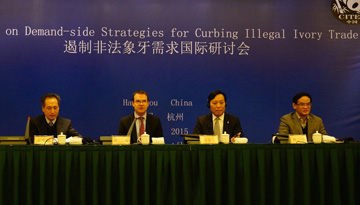 I would like to express my sincere thanks to the Government of People’s Republic of China for co-organizing this workshop with the CITES Secretariat and for inviting me to share some brief opening remarks with you this morning.

I would also like to express our deep thanks to the representatives of the Chinese State Forestry Administration, Ministry of Foreign Affairs, Ministry of Culture, and General Administration of Customs, as well as representatives of the United Kingdom of Great Britain and Northern Ireland, the United States of America and the European Commission who have all joined us for this groundbreaking workshop. Welcome also to representatives of the UN Development Programme, UN Environment Programme, the UN Office on Drugs and Crime, the World Bank, the private sector, non-governmental organizations, and experts and specialists from many different disciplines, including from the collection and art investment circles.

As you know, ivory from elephant tusks and other mammals have been carved since ancient times across many regions and cultures. In recent centuries, the demand for both carved and raw ivory has mainly been driven by buyers in Europe, North America and Asia.

CITES is of relatively recent origin, dating back to 1973, and with the entry into force of CITES in 1975 the international trade in specimens of wild animals and plants, including elephant ivory (since the African elephant was first included on the Appendices in 1976), was regulated for the first time.

CITES seeks to ensure that international trade in wild fauna and flora is legal, sustainable and traceable. The current alarmingly high level of poaching of African elephants for their ivory has resulted in both illegal and unsustainable trade – but efforts to trace this illicit trafficking, and those responsible for it, are increasingly effective.

Elephant populations across Africa are continuing to be seriously affected by poaching and in some places they have declined dramatically due to poaching, which is the most immediate human impact on this iconic species, while also recognizing the threats posed by habitat loss and other factors. The illegal trade in elephant ivory is putting illicitly gained profits into the hands of poachers, illegal traders and speculators at the expense of ecosystems and the services they provide, while also undermining the rule of law, local and national economies and in some cases national and regional security.

As was recognized in the outcomes from the Rio+20 conference organized by the United Nations in 2012, international trafficking in wildlife requires strengthened action to be taken on both the supply and demand sides.

Following decisions taken at the 16th meeting of the Conference of the Parties to CITES in 2013, some African elephant range States are deploying considerable efforts to fight elephant poaching and control the supply of illegal elephant ivory. Destination and transit countries have also intensified their enforcement efforts to better control their borders and we are seeing enhanced cooperation to combat illegal wildlife trade across the entire illegal supply chain.

Today’s workshop has the demand side, particularly in relation to China’s ivory market, as its focus. We hope to use our time together to gain a deeper understanding of this market and the drivers of demand for both illegal and legal ivory, including by better understanding and focusing upon the main actors involved. We also aim to raise awareness of the severe penalties that are now being applied to ivory smugglers, sellers and investors dealing in illegal ivory, and the devastating impacts their unlawful investments are having on elephants and people.

This week we are also talking about heritage – national and global and cultural and natural.

African elephants are an integral part of sites that have been recognized internationally for their Outstanding Universal Value under the UNESCO World Heritage Convention of 1972. They are considered part of the world’s natural heritage, are an irreplaceable part of the natural systems of Africa, and a source of great inspiration. We have recently seen  natural heritage sites included on the List of World Heritage in danger due to high levels of poaching, such as the Selous Reserve in the United Republic of Tanzania.

Ivory carving in Beijing and Guangzhou is recognized by China as part of its intangible cultural heritage through a national inventory prepared under the UNESCO Convention for the Safeguarding of the Intangible Cultural Heritage of 2003. Quite clearly, this recognition by China of ivory carving in Beijing and Guangzhou does not in any way safeguard the carving of or trade in illegally sourced elephant ivory either under national law or the 2003 Convention.

We welcome the various mass awareness campaigns that are underway in China, and elsewhere, to reduce the size of illegal markets for wildlife, and applaud the institutions and personalities that are behind them. However, we also need to better understand and target the key black market drivers of the demand for high volumes of illegal ivory. This includes targeting those people who speculate in illegal ivory driven only by a profit motive and not by any cultural value or association. We believe that these speculators comprise only a tiny fraction of the population, and that they are individuals who may not be influenced by mass awareness campaigns.

Addressing the issue of demand for illegal ivory requires practical insights into what is going on in the marketplace so we can gain a deeper understanding of the exact nature of that demand, and develop evidence-based and action-oriented demand-side initiatives – to target the right audiences with the right messages and thereby increase their likelihood of causing the desired behavioral change. That is why we are all here today.

China has been very active in supporting the implementation of CITES both domestically and internationally. Over the past few years, China has hosted a number of important international workshops related to CITES, including on combating illegal ivory trade. In addition, China led the first cross-continent enforcement effort known as Operation Cobra in 2013, and at this time last year China publicly destroyed 6.2 tonnes of seized ivory.

We have also seen the establishment of the China National Interagency CITES Enforcement Collaborative Group in 2011 to better support coordinated enforcement efforts within China, which has led to increased numbers of seizures, prosecutions and convictions. The imposition of high monetary fines and custodial sentences on those who have been convicted of illegally trading in elephant ivory is being widely publicized and serves as a strong deterrent to others.

Ladies and gentlemen, over the next two days we will hear from a wide range of speakers on these issues. We respect that people may have different perceptions and perspectives on the underlying causes of elephant poaching and the main drivers of the demand for ivory. The workshop is open to the expression of all opinions but will focus on where there is common ground.

And as a starting point, it is clearly evident that we are experiencing a dramatic loss of African elephants through poaching for their ivory, with a severe decline in elephant populations in some places. It must be stopped.

If speculation is, or appears likely to be, one of the key drivers of the demand for illegally traded ivory, then intervention in this sector, through a well targeted campaign to bring this illicit speculation to an end, is warranted.

At the very beginning of a new year, we hope that the messages being conveyed through this workshop in Hangzhou are heard loud and clear by anyone who is investing or planning to invest in illegally sourced elephant ivory:

People who buy illegally sourced ivory now run a much higher risk of being arrested, prosecuted and severely punished for these serious crimes;

Forensic technology can now easily identify the date and origin of illegally sourced ivory and provide the evidence needed to bring those involved in illegal trade to justice; and

Buying illegal ivory has become a highly risky and unwise investment that will inevitably lead to great financial and personal grief for those involved.

I would like to end by expressing my thanks to the Government of China for hosting and supporting this week’s important and groundbreaking event as well as the Government of the United Kingdom for its financial support.  This workshop serves to focus additional and much needed attention on demand-side strategies for curbing illegal ivory trade and is a further demonstration of China’s commitment to stopping the illegal ivory trade.