Nairobi, Geneva, 1 November 2021 – The CITES programme for Monitoring the Illegal Killing of Elephants (MIKE) has published its annual analysis of continental and sub-regional trends in the levels of elephant poaching, derived from data collected in 95 MIKE sites across 43 elephant range States in Africa and Asia.

Using data gathered by ranger patrols, the MIKE programme monitors trends in poaching levels based on the Proportion of Illegally Killed Elephants (PIKE) index. This is calculated on an annual basis as the number of illegally killed elephants found divided by the total number of elephant carcasses found, which includes elephants illegally killed, elephants that died of natural causes, management-related deaths, and carcasses for which the cause of death could not be established.

PIKE is an index of elephant poaching pressure. It may be affected by potential biases related to data quality, the fact that MIKE sites are not randomly selected, the reporting rate, carcass detection probabilities, and the variation in natural mortality rates across MIKE sites - including increases in natural mortality caused by drought and other factors.

The overall 2020 PIKE estimate for Africa is the lowest since 2003. Strong evidence points to continued downward trends in subregional analyses of data from MIKE sites in central, eastern, and southern Africa, while there is marginal evidence of a downward trend for sites in west Africa. The dataset used for this latest PIKE trend analysis for Africa consists of 22,015 records of African elephant carcasses recorded between 2003 and the end of 2020 at 66 MIKE sites in 30 range States in Africa. 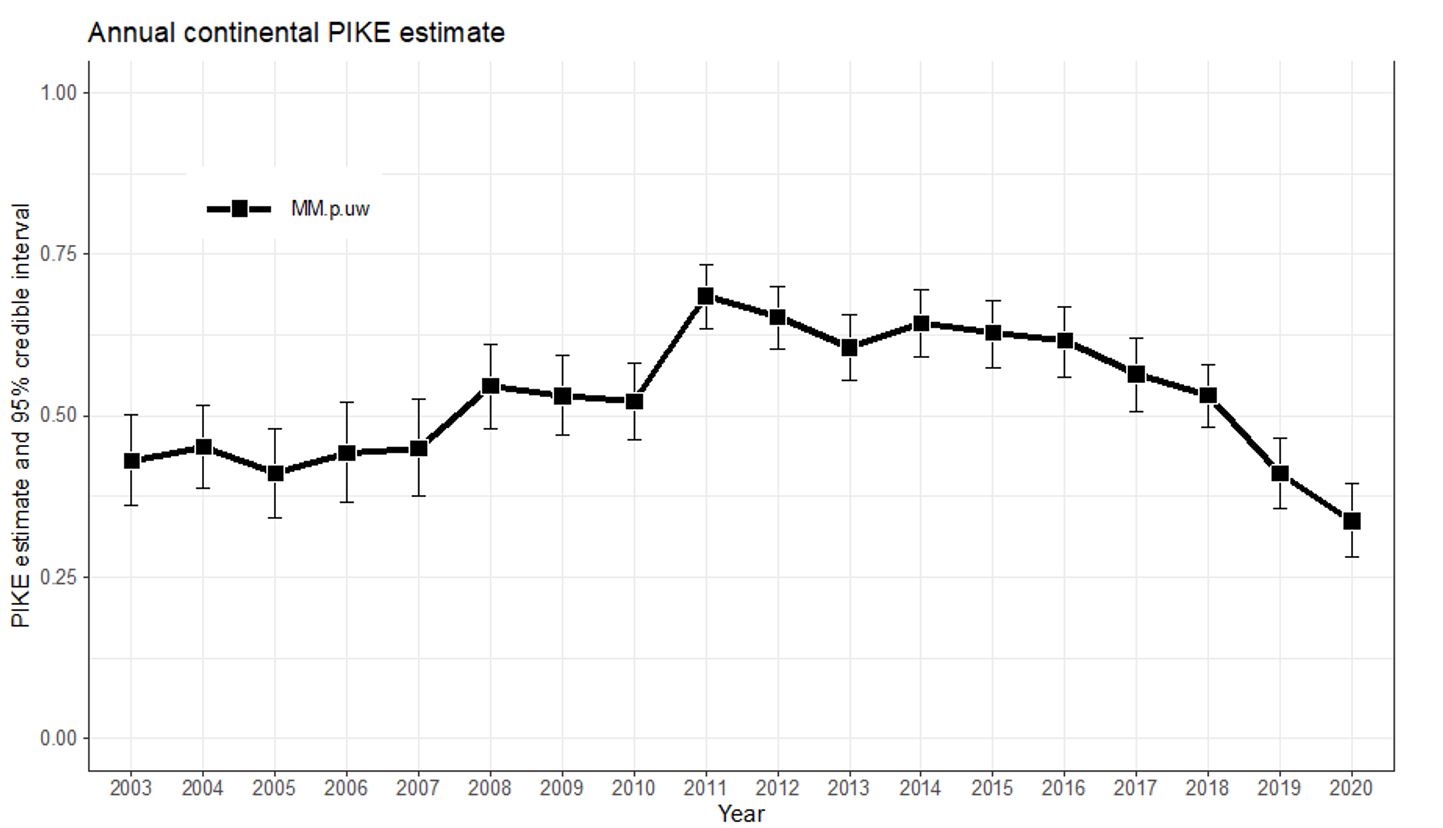 Regarding Asia, the dataset analyzed consists of 3,887 records of Asian elephant carcasses found between 2003 and the end of 2019 at 29 MIKE sites in 13 range States in Asia.

The continental PIKE trend for Asia has remained relatively flat in the last five years (2015-2019), with a slight decrease visible from 2018 to 2019. 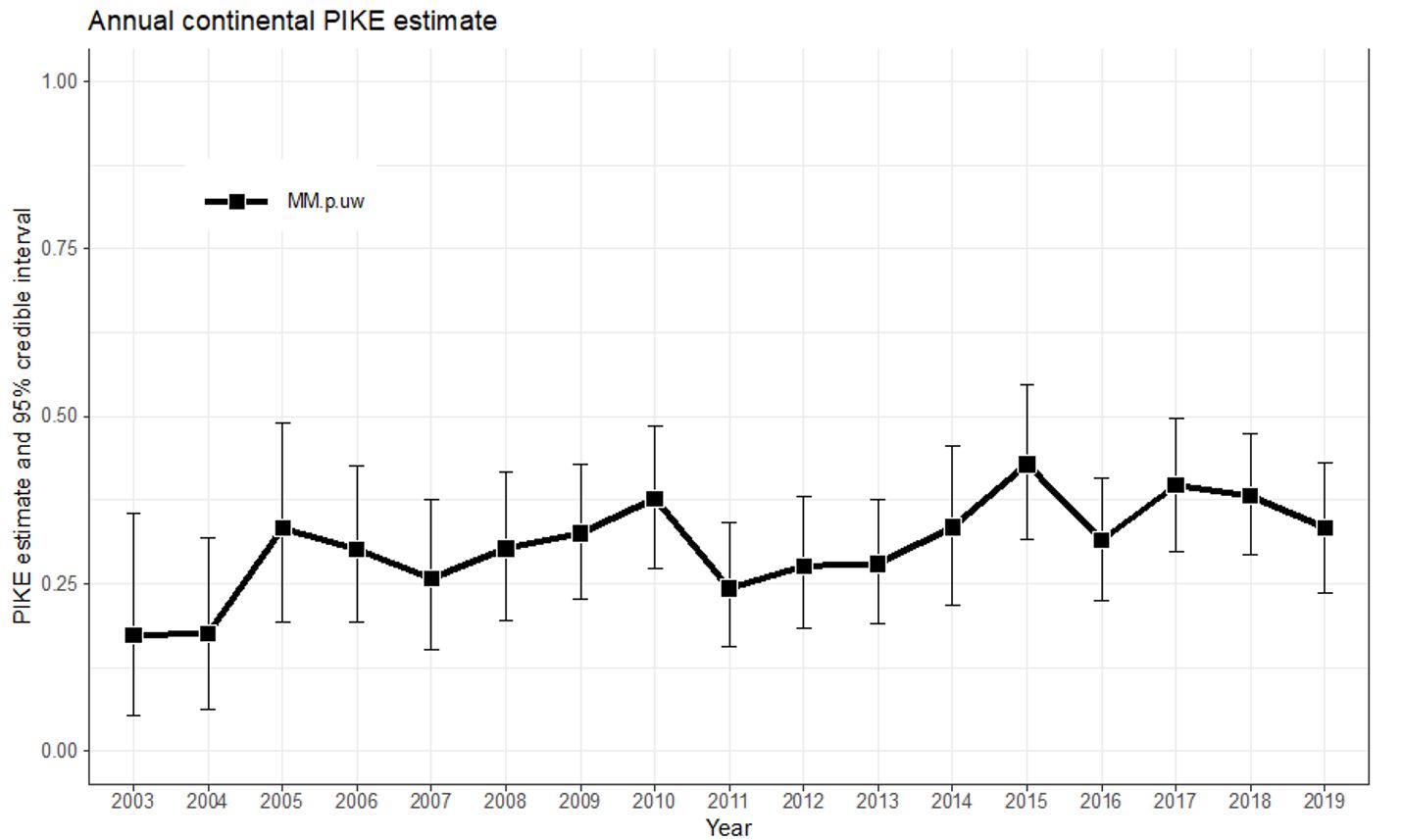 CITES Secretary-General Ivonne Higuero welcomed the news of the report: "The evidence of a continued decline in elephant poaching pressure is proof that efforts by Parties and their conservation and enforcement authorities are having an impact on the ground. Less poaching pressure benefits protected areas and key ecosystems across their range States and supports other ongoing conservation efforts. This report also underscores the value of long-term data collection efforts such as those undertaken under the MIKE programme. The wealth of information available will be of great value to Parties in their decision-making as they prepare to further reinforce the Convention at next year’s meeting of the Conference of the Parties."

As was the case in the 2020 report, the PIKE data was interpreted using an unweighted Bayesian GLMM (MM.p.uw), a method which was recommended by the MIKE-ETIS Technical Advisory Group (TAG).

The CITES MIKE programme was established by the Conference of the Parties to CITES at its 10th Meeting (Harare, 1997) and is conducted in accordance with the provisions in Resolution Conf. 10.10 (Rev. CoP18) on Trade in elephant specimens.

Its aim is to inform the 183 Parties to CITES and improve their decision-making on elephants by measuring trends in levels of illegal killing of elephants, identifying factors associated with those trends, and building capacity for improved elephant management in range States.

The programme is managed by the CITES Secretariat under the supervision of the CITES Standing Committee. Since implementation began in 2001, the operation of the programme has been possible mainly thanks to the financial support of the European Union and other donors, including the United States’ Bureau of International Narcotics and Law Enforcement Affairs (INL) and the Government of Japan.