I would like to express my sincere thanks to the Government of Hong Kong SAR for inviting me to witness the first of a series of planned events to incinerate 28 tonnes of confiscated elephant ivory. 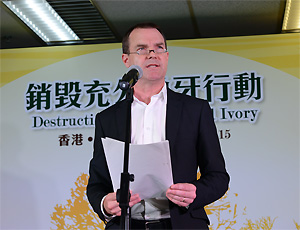 Despite considerable efforts to combat wildlife crime, it continues to be a major problem worldwide. The poaching of African elephants and the illegal trade in their ivory is one of the most noticeable and destructive forms of wildlife crime.  It is not only having a devastating impact on the African elephant, but it also poses a threat to people and their livelihoods – as well as national economies and in some cases national and regional security.

It must stop and the international community is determined to end this illicit trade.

At the 16thmeeting of the Conference of the Parties to CITES, Parties showed that they were prepared to work together to ensure the survival of the African elephant. They spoke with one voice on the need to take decisive actions in stopping the alarming trends in poaching and smuggling.

CITES Parties recognized the need for targeted and time-bound actions to be undertaken along the entire illegal ivory trade chain – from range and transit States to final destination States and markets, and to tackle both supply and demand.

What was recognized by all of the Parties to CITES at CoP16 last year is even more relevant today: reversing the disturbing trends in elephant poaching and ivory smuggling requires a sustained and collective international effort.

A year after the conclusion of CITES CoP16, we are seeing significantly enhanced and effective measures taken across range, transit and destination States - such as through the excellent results achieved by law enforcement officers from 28 countries during Operation COBRA II, a month-long global operation to combat illegal wildlife trade.

Further, both in the lead-up to CITES CoP16, and subsequently, we have seen political commitments made, often at the highest political level, to increase efforts to combat wildlife crime more effectively, and often with a focus on the illegal ivory trade.

Distinguished guests, the destruction of confiscated elephant ivory does not negate the cultural heritage of historic ivory carvings, nor will it in itself put an end to the illegal trade.

However, coupled with the seizure of ivory and prosecution of offenders, it sends a powerful message that Hong Kong SAR, does not accept and will not tolerate this illegal trade or the devastating impact it is having on the African elephant and on the livelihoods of rural communities.

It also provides a very public opportunity to send a message to those who trade illegally in elephant ivory that the age and origin of their contraband can readily be identified through the use of modern forensics.  And therefore, whatever may happen in the future, illegally traded elephant ivory will never have any commercial value and the return on the ‘investment’ will most likely be imprisonment, heavy fines, and seized assets. 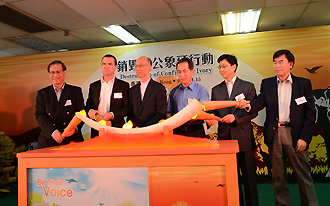 As a major metropolis and one of the world’s major commercial centres, Hong Kong SAR is in a unique and important position, both culturally and economically. It is both a major consumer of a variety of wildlife products and a transit point to mainland China.

In addition to dealing with huge volumes of daily shipments, I understand that the Customs service of Hong Kong SAR sees about 100 million passengers passing through its gates each year to travel to Shenzhen in mainland China, where the largest Customs team in the world operates. This makes the work of the Customs and CITES officers on both sides of the border most challenging.

Over the past years, Hong Kong SAR has consistently played an exemplary role in the implementation and the enforcement of CITES. The Hong Kong Customs and the Agriculture, Fisheries and Conservation Departmenthave twice received the Certificate of Commendation from the CITES Secretary-General. In fact, they were the first to receive such a certificate in 2003 for having uncovered a large quantity of ivory carefully concealed on a ship, which resulted in the subsequent prosecution and imprisonment of the vessel’s master.

A few months ago, as a sign of increasing international cooperation Hong Kong SAR returned seized ivory and rhino horn to South Africa to facilitate investigations and determination of the origin of the items by DNA analysis, and other means, to support the prosecution of poachers and smugglers. The operation was welcomed as a very positive step towards combatting the illegal trade that is destroying the world's elephant and rhino populations.

Distinguished delegates, the enhanced collective effort to combat illegal wildlife trade – both at international and national level – is clear evidence that illegal elephant ivory trade is increasingly being recognized by States as a serious crime, which now carries a much higher risk of detection, prosecution and conviction in a growing number of countries – with higher penalties, including fines, imprisonment and the confiscation of assets being imposed.

It is through such strengthened and sustained collective efforts that we will be able to reverse the current disturbing trends in the poaching and smuggling of the African elephant, and combat other wildlife crimes much more effectively.

Finally, I would like to express my sincere thanks once again to the Government of Hong Kong SAR for today’s important event.

It has served to raise public awareness about the impacts of illegal ivory trade and wildlife trafficking, and of the global community’s collective determination to put an end to it.

See more photos from the event.