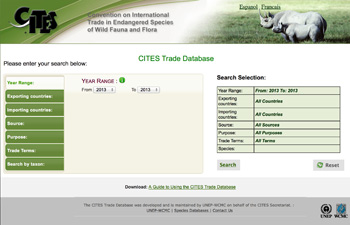 Cambridge, Geneva, Nairobi, 17 April 2014 – Access to the Convention on International Trade in Endangered Species of Wild Fauna and Flora (CITES) Trade Database – which contains some 14 million records on the international trade in CITES-listed species – is now easier and more reliable, thanks to cutting-edge, open source technologies.
The database, which is primarily used by Parties to CITES to inform their decisions on species under threat, has undergone a technical overhaul led by the CITES Secretariat, the United Nations Environment Programme (UNEP) and the UNEP- WCMC. Financial support was provided by WCMC, UNEP's partner in Cambridge and from the Norwegian Government contribution to UNEP.
The millions of records compiled since the Convention came into force in the mid-1970s reflect the international trade in CITES-listed species, as recorded by CITES Parties within their national reports to the Convention.
As such, the database provides the basis for making “sustainability findings” and underpins important CITES processes such as the Review of Significant Trade, the Periodic Review and even daily decision-making concerning the issue of export and import permits.
In this most recent upgrade, the database, which is managed for CITES by UNEP-WCMC, has been enhanced to better support the work of the 180 Parties to the Convention. The infrastructure changes use novel open-source software as the basis for accessing data from national reports.
Among notable improvements to the CITES Trade Database are faster search speeds and more reliability, which can assist Parties who seek trade data to better inform their decisions about trade in CITES-listed species.
The improved speed, performance and upgraded infrastructure will also enable the development of further improvements to the system in the future. For example, the cutting-edge infrastructure now in use will provide the foundation for trade visualisation and mapping tools, which will present data in a more user-friendly manner.
Other developments, including computer-to-computer connections between the CITES Trade Database and other platforms – such as CITES Checklist, Species+ and national systems – should, in the future, enable Parties to submit trade data automatically and also “pull” selected species information from these platforms.
Lastly, the new infrastructure will support the development of mechanisms allowing Parties to more easily register CITES e-permits for legal, sustainable and traceable trade in wildlife on the CITES Trade Database. This would provide Parties with up-to-the-minute data on the levels of international trade in CITES-listed species.
Tags
News and highlights
Other news items