Geneva, 16 February– Further enhancing international cooperation to combat rhinoceros poaching and the associated illegal trade in rhinoceros horn was in focus in Geneva last week, with the Convention on International Trade in Endangered Species of Wild Fauna and Flora (CITES) Secretariat hosting Ministerial-level and Senior Officials meetings for key States concerned with this serious crime.

The illegal poaching of rhinoceroses continues to escalate sharply and in 2014 poaching in South Africa – home to around three quarters of the world’s rhinoceroses – reached an alarming high with 1,215 rhinoceroses killed illegally, compared to 13 in 2007.

Ministers and high-level delegates from the Czech Republic, Mozambique, South Africa and Viet Nam – the key States identified by decisions taken under CITES as being affected by poaching and illegal trade of rhinoceros horn as range, transit or destination countries – came together on Saturday to focus on how to enhance international collaboration to combat these serious crimes. Officials from China joined the meeting as observers, along with the President of the African Ministerial Conference on the Environment, the Hon. Binilith S. Mahenge, the United Republic of Tanzania’s Minister of State for Environment, and representatives from International Consortium on Combating Wildlife Crime (ICCWC) partner organizations.

CITES Secretary-General, Mr. John E. Scanlon, who facilitated the Ministerial dialogue said “Rhinoceros poaching and illegal trade in rhinoceros horn continue to be among the most structured criminal activities faced by CITES. Deep and ongoing international cooperation is critical to combating these crimes. Today’s Ministerial dialogue has secured further political commitment from key States to enhance their bilateral, trilateral and multilateral cooperation and a commitment to work together on tangible short and medium-term actions”.

Minister Edna Molewa, South African Minister for Environmental Affairs, who participated in the dialogue, said “South Africa is home to 93% of Africa’s white rhinos and 39% of Africa’s black rhinos thanks to our sterling conservation track record. But poaching threatens to undermine these successes. During 2014 we lost 1,215 rhinos – an increase from 1,004 in 2013. As we count the cost not only in financial terms but also in terms of the loss of human life and risk to our national security it is clear South Africa cannot win this fight alone. And in this we count on the support of our international partners, and bodies such as CITES, INTERPOL, the United Nations Office on Drugs and Crime and the World Customs Organization, to bolster our existing anti-poaching efforts – so that our rich wildlife legacy is conserved for generations to come”.

Ambassador Pedro Commissário, Permanent Representative of the Republic of Mozambique in Geneva, stated “By 2016 Mozambique will have reduced poaching of rhinoceroses and illegal trade in rhinoceros horn through increased protection, law enforcement and public awareness programmes. The Mozambique national rhinoceros and ivory action plan recently submitted to CITES provides a framework for the delivery of these key actions required to combat rhinoceros-related crimes”.

Associate Professor Ba Ngai Nguyen, the Deputy Director General of the Viet Nam Forest Administration, said “Viet Nam highly appreciates the initiative to convene the key States to mobilize greater international efforts and political commitment, and strengthen cooperation among all concerned countries and international organizations to combat rhino poaching and the associated illegal trade in rhinoceros horn. We strongly confirm that the Government of Viet Nam will continue to contribute our responsibilities and obligations to the international communities’ efforts to stop the poaching and conserve this beautiful species for our future generations”.

The CITES Ministerial dialogue followed a two-day Senior Officials meeting at which national Customs, police and wildlife authorities worked with experts from ICCWC partner organizations to prepare recommendations on well-targeted interventions and specific areas of cooperation. The Ministerial dialogue provided Ministers and high-level delegates with an opportunity to discuss the 19 short- and medium-term actions recommended by the Senior Officials meeting, to share their national experiences with combating rhinoceros-related crimes and to reflect on the remaining challenges and highest priorities for enhanced cooperation (view the Chair's summary of the Ministerial dialogue). 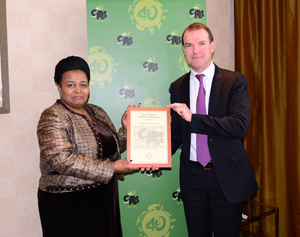 The Ministerial meeting concluded with the presentation of CITES Secretary-General’s Certificates of Commendation to South African authorities that participated in ‘Operation Whisper’, an undercover operation that resulted in the arrest of members of organized crime groups involved in rhinoceros poaching and illegal international trade in rhinoceros horn. The certificates were accepted by Minister Molewa on behalf of the South African Police Service, the National Prosecuting Authority of South Africa and Ezemvelo KwaZulu-Natal Wildlife.

For media enquires related to South Africa’s efforts to combat rhinoceros poaching and the illegal trade in rhinoceros horn contact Albi Modise at the South African Department of Environmental Affairs on +27 (0) 83 490 2871 (mobile).